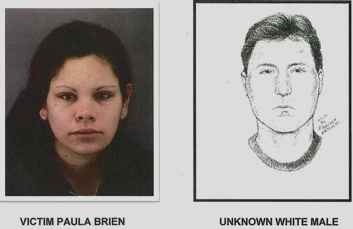 San Francisco police are asking for the public’s help in solving a murder committed more than 10 years ago.

Paula Brien was last seen leaving a bar at Sixth and Mission streets shortly after midnight on June 18, 2001, police said.

Brien left the bar with a man and was found murdered two hours later less than a mile away at 455 Harriet St.

The man she left the bar with was described as white, 6 feet tall, weighing 200 pounds, with black hair and a tattoo of a skull and cross bones on his right upper arm.

At the time of the murder, he was described as being between 35 and 40 years old and was seen driving a red vehicle, police said.

Photo of Paula Brein and person of interest in case: SFPD