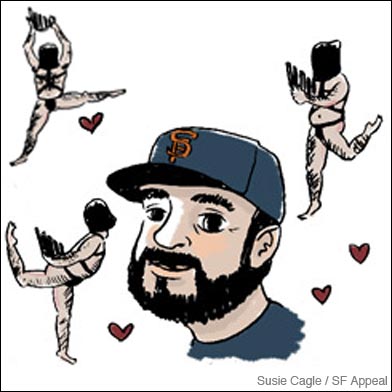 The Giants brought the young baseball players into AT&T Park Thursday afternoon for a question-and-answer session with Wilson and to receive a glove.

“I never thought I was going to meet him,” said 10-year-old Paris Mankin-Wallace, an outfielder for the SF Sluggers.

His friend, 8-year-old Bogdan Dahdouh, planned to ask Wilson to sign his baseball. While Wilson signed no autographs, he personally handed out gloves to many of the Junior Giants in attendance.

The leagues provide equipment for participants while they are playing and practicing, but the new gloves will allow them to better practice at home, and provided many of the young players with an upgrade or backup.

Wilson joked that he did not have a glove while he was growing up until his father let him pick one out at Kmart.

“I would have loved to have a glove,” he said. “Why not give the whole league a glove?”

When asked what his favorite moment in baseball was, Wilson did not mention his closing pitch in the World Series last year nor even his professional career, but instead recalled his Little League days.

Wilson said that his signature arm cross after every game was to thank his father, who died of cancer when he was 17 years old, for encouraging him to develop his talent for baseball.

The Junior Giants also asked Wilson about young catcher Buster Posey, who was injured this season during a collision at home plate. Many of the kids said that Posey was their favorite player, and one youngster asked Wilson whether he was sad when Posey was injured.

“Throwing to him was a gift,” Wilson said. “You’re not going to see another player come up as fast as him and have an impact on a team.”

As he handed out the Wilson-brand gloves, which are unrelated to the pitcher, Wilson said, “These gloves look sweet, I want one.”

He also reiterated his craving for a Capri Sun until a Giants staff member handed him one.

Outside, the Junior Giants played catch in the parking lot as they waited for the night’s game.

“They’re excited coming here today. They got to see Brian Wilson up close,” said Milagros DeAquino, the mother of a player in the Recreation and Park Department league.

Roberto Martinez, an 11-year-old pitcher said, “It was nice seeing Brian Wilson for the first time. It was nice of him to give us the gloves.”

His teammate, 11-year-old Nolan Leung, said, “”I got a free glove and I got to meet Brian Wilson, best day of my life.”

The Giants won Thursday night’s game against the Padres 2-1.

Wilson closed out the win for his 25th save of the season.