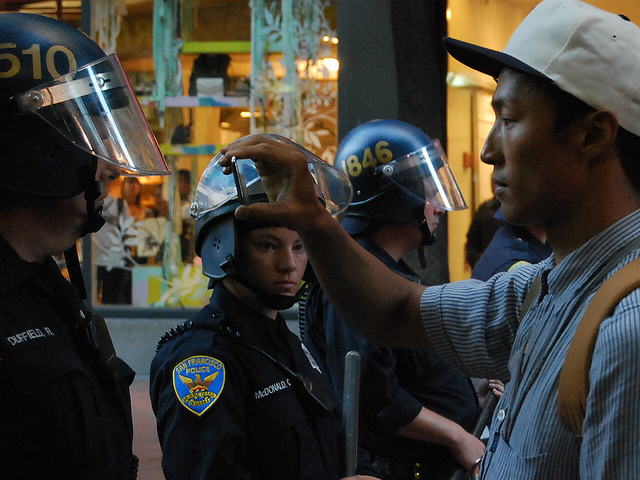 San Francisco police said today that more than half of the 45 people arrested during Tuesday evening’s protest over a fatal police shooting last weekend were not city residents.

The demonstration was in response to the fatal shooting Saturday of 19-year-old Kenneth Harding Jr., who allegedly ran from police and fired at officers who had attempted to detain him while conducting fare enforcement at a San Francisco Municipal Railway light-rail stop in the city’s Bayview District.

The rally began at about 5 p.m. with about 150 people gathering at Dolores Park, followed by a march that began about an hour later through the city’s Castro and Mission districts before proceeding down Market Street to Powell Street.

Protesters were repeatedly warned by officers to leave the roadway and to return to the sidewalk, and they were arrested when they refused to comply, police said.

The protesters were then taken away from the scene and cited for failure to obey a lawful order to disperse by a law enforcement officer.

Of the 43 people arrested for the protest violations, 26 were not city residents, including one who was not from California, according to police.

One person was also arrested for assaulting a member of the media, while another was arrested on suspicion of an assault in the Castro, police said.

At one point while protesters were walking past the Mission Police Station, one threw a hammer at officers, but no one was injured, according to police.

The rally and march was the latest in a series of protests in the days since Saturday’s shooting. A town hall meeting to discuss the case is scheduled for 6 p.m. tonight at the Bayview Opera House at 4705 Third St.

Police Chief Greg Suhr and Supervisor Malia Cohen are among the speakers expected to attend the meeting.

Critics of the shooting have pointed to amateur video footage of the aftermath of the exchange that they said showed Harding did not receive medical treatment immediately after the shooting despite several officers being in the area.

Some have even questioned whether Harding had a gun or if he fired at the officers.

Police have said that one of the videos taken at the scene showed a passerby picking up what investigators believe is Harding’s gun and taking it from the area before police could set up the crime scene. A gun has since been found at a local parolee’s house, but police have not confirmed whether that was the gun involved in the shooting.

On Tuesday, police also said analysis of evidence collected from Harding’s right hand revealed gunshot residue, supporting statements from the officers and several eyewitnesses that he fired at them prior to being shot.

Harding, a Seattle resident, was a person of interest in a shooting in that city last week that killed a 19-year-old woman and injured three other people, police said.

He was on parole in Washington State after serving part of a 22-month sentence for attempting to promote the prostitution of a 14-year-old girl, and was in violation of his parole by being in San Francisco, according to police.

Want more news, sent to your inbox every day? Then how about subscribing to our email newsletter? Here’s why we think you should. Come on, give it a try.t