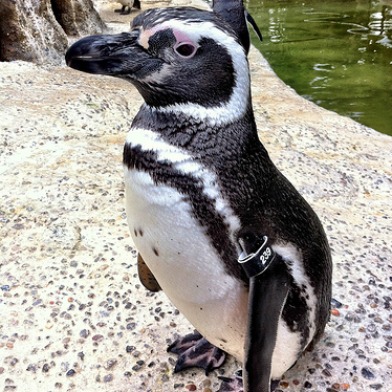 Five penguin chicks have graduated from “fish school” and are returning to the San Francisco Zoo’s Penguin Island this morning for a graduation march–or waddle.

The Magellanic penguins were hatched on Penguin Island in mid-May. They were removed from the exhibition area when they were about five-weeks old to attend “fish school” at the Avian Conservation Center, zoo officials said.

While at the school, the one female and four male chicks learned to swim and were hand-fed fish by animal-keepers to help them acclimate to people.

The graduates are returning to their birthplace this morning to rejoin the zoo’s other penguins, bringing the total number up to 49 — the largest group of Magellanic penguins in North America, according to the zoo.

Zoo members are invited to watch the chicks as they waddle around the island and reunite with the other penguins this morning at 10 a.m.

Shortly before the graduation ceremony, zoo officials will hold a naming contest for zoo members. Participants will be asked to submit name suggestions for the female chick.

The winner will go on Penguin Island along with zookeepers.