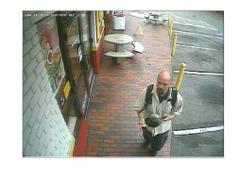 At 7:10 a.m. a man parked his silver Hyundai Sonata at the fast food chain at 1380 N. California Blvd. He left his key in the ignition then went into to the restaurant to grab a coffee. When he returned about three minutes later he saw his car being driven away, police said.

According to police, the man had San Francisco Giants memorabilia including former player Willie McCovey autographed bats and balls in the Hyundai. There was also a commercial kitchen mixer in the trunk.

The car was last seen turning out of the lot onto Cypress Street, police said.

Surveillance video caught the car theft and gave police a look at the suspect. He is described as a white man in his late 20s or early 30s with a thin build, shaved head and a goatee and about 5 feet 10 inches tall. In the video he was wearing a tan button-down shirt with green pants and carrying a black backpack, police said.

Police asked for anyone who recognizes someone with this description or comes across any Willie McCovey bats or balls to call Walnut Creek police at (925) 943-5844 and ask for Officer Jeha.