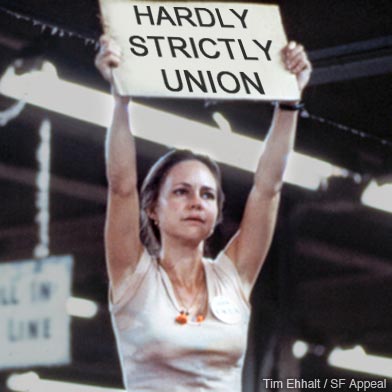 Bright shining savior of journalism or banjo-banging billionaire‘s plaything? The Bay Citizen is both, but to this list we may now soon add a third descriptor: union shop.

Members of the new media nonprofit cast votes to join a very old media invention in the Pacific Media Workers newspapers guild on Tuesday, according to the National Labor Relations Board, which oversees organized labor actions in these United States.

Out of 14 votes cast by editorial employees, seven voted in favor of joining the guild to five against, according to paperwork on file at the NLRB. Two votes were challenged — meaning either management or the workers are saying that they were cast by people who should not have been allowed to vote — which could affect the outcome of the vote, according to Daniel Owens, supervisor at the San Francisco office of the NLRB, which oversaw Tuesday’s vote. A decision on those votes should come by next Tuesday, July 19, by which time the union vote could become official, Owens said.

The Bay Citizen’s shop steward is veteran reporter and author Aaron Glantz, who made a national name for himself with his reporting on the Iraq War and the subsequent impact on veterans. When contacted, Glantz declined to comment, asking the Appeal to wait until Tuesday, when the brand-new union shop plans to issue a press release regarding their vote.

Jonathan Weber, the Bay Citizen’s editor-in-chief, said management was supportive. “We support employees’ right to organize if that’s what they want to do,” he said. “That’s been our position all along.”

Both parties, management and workers, also have until Tuesday to file objections about the process (if either party to the election interfered with employee free choice, thus tainting the vote, Owens said). Tuesday is also the parties’ deadline to submit evidence to the NLRB to assist it in resolving the issue regarding the two disputed votes, Owens said.

If the two disputed ballots are determined to have been cast by employees who should not have voted — for example, if they should have been considered management — they will be thrown out and the Bay Citizen’s 14 editorial staffers — out of a total staff of roughly 30 — will be card-carrying union members. If the the ballots are counted and they are “no” votes, the vote will be a tie and the union effort will fail.

The final determination on a union shop at the Bay Citizen could be further delayed if objections to the process are filed. “If objections are timely filed with a sufficient offer of proof, the Regional Office will conduct a ‘full investigation’ to determine whether the election results should be certified or set aside and a new election conducted,” Owens said in an e-mail.

A successful union effort would be a boon for the Pacific Media Workers Guild, which has seen its membership decline as old media print organizations shed workers. Organizing at a trend-setting publication like the Bay Citizen could start positive momentum for the Guild to organize at other Web sites (note: the Appeal is not a union shop; it’s more of a worker-owned cooperative. According to Editor and Publisher Eve Batey, some Appeal contribs are members of the Internet Press Guild and the Pacific Media Workers freelance unit).

Media Workers Guild Executive Officer Carl Hall, a former Chron scribe served as the Bay Citizen’s de-facto spokesman way back when — back before the Bay Citizen graced the pages of the New York Times, back when it was still amino acids in primordial soup looking for bonds to create as the Bay Area News Project.

But not today. “I can’t comment,” Hall said, when contacted by the Appeal on Wednesday.

It’s unclear how the union move would affect the Bay Citizen’s relationship with its many patrons, including billionaire financier Warren Hellman, whose $5 million in seed money helped hire the likes of $400,000-a year CEO Lisa Frazier.

Hellman, you may recall, was a chief proponent of pension-reform measure Proposition B last fall, but withdrew his support in the weeks before the election after listening to concerns from union firefighters, the Bay Citizen itself reported.

According to a January press release from the news org, other patrons include Hellman-family founded Wells Fargo and First Republic Bank, which counts Hellman as a high-profile client. In an exchange with reporter and transparency activist Michael Petrelis, Weber said the Bay Citizen expects to release full information on its patron relationships “in due course.”