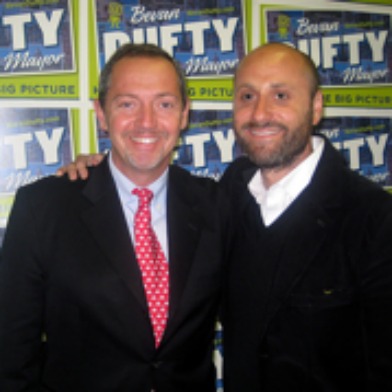 He won’t undergo any additional Ethics Commission investigations, but in the court of public opinion — and in the political world of which he remains a part — local political consultant Alex Tourk’s decision to join the Bevan Dufty campaign for San Francisco mayor — after working for months for competitor Dennis Herrera — is raising eyebrows, and quite possibly removing names (Tourk’s, mostly) from Christmas card lists (Herrera’s, only).

Tourk is, of course, one of the most well-known political consultants in San Francisco. With a history in winning mayor’s races dating back to Willie Brown and as the founder of Project Homeless Connect, he would be well-known even if former friend and client Gavin Newsom was always perfectly chaste.

Yet to be removed from a campaign for an ethics violation — which was in fairness little more than an “over-reporting,” and could have been at best a mere clerical error — only to land on a competitor’s side is strange, indeed.

On the record, Tourk’s clients new and old wish him well. “Tourk is a great talent — it’s not surprising somebody else saw the value of his services,” said former Tourk and Herrera staffer Maxwell Szabo, who departed the Herrera campaign as a field organizer a few weeks ago. Jill Nelson, spokeswoman for the Herrera campaign, said “we wish them [Dufty and Tourk] the best of luck working together.”

However, political insiders say Tourk’s informal rule violations here are twofold. One, that Tourk would rejoin the 2011 election cycle at all after a very public exit, and two, that he’d make the nearly unheard-of move of joining up with a competing campaign after helping lay the groundwork — from identifying voters, to running polls, to plotting strategy — for a rival effort.

Not quite as bad as passing gas in front of Dede Wisley at a Schultz dinner party (though anyone who does that wins our admiration for life) but for some, equally uncouth — and perhaps socially-damaging.

“It’s a rare thing, and it’s surprising,” said a local consultant, speaking on background, who added that the word is that Tourk had been in talks with at least one other campaign interested in his services. Yet the move — first announced via former mayor and Tourk client Willie Brown’s Sunday column in the Chronicle — may say more about Dufty than it does about Tourk.

Dufty has cycled through multiple high-priced, high-profile consultants — from pricey Obama alum Steve Hildebrand, who departed last year, to David Feighan, who left last month — prior to Tourk, whose addition at this late stage “seems to me a desperate act,” said another political insider. “And now you go for the guy who lost his last job for failing to follow the ethics rules?”

As another insider put it: “It shows Bevan doesn’t care,” a sentiment seemingly confirmed by SF Weekly, which reported that “(w)hen asked the status of the Ethics Commission investigation of his new hire, Dufty says he doesn’t know. And doesn’t much care.”

In an e-mail, Dufty campaign spokesman Roby Chavez called Tourk “one of the best field organizers, and brings with him the full team from his firm Ground Floor” [or what’s left of it after the ethics kerfuffle caused him to lose high-profile California Pacific Medical Center, on whose behalf Tourk recorded lobbying contacts with Herrera].

Chavez did not comment on the propriety of Tourk’s move — which a rival campaign called “pretty fucking unethical” — saying only “we have a close knit team which has the experience and expertise to win in this non traditional election,” and that current chief strategist Michael Terris, brought on board after Dufty parted ways with expensive Obama alum Steve Hildebrand, “continues to [lead]… and his leadership has remained constant and very strategic.” So there’s that.

In fairness, The Appeal should note we did not attempt to contact Tourk for this story (in part so his perfect streak of not returning our calls and emails for the past five or so stories is safe. Love you, Alex).

At the very least, the move shows the Dufty campaign — which reporting spending over $500,000 to date as of July 1 — is sparing no expense in its race for the top.

“Alex is not cheap,” yet another anonymous consultant (isn’t gossiping fun?) told The Appeal, guestimating his monthly rate at “five figures.”

Photo of Dufty and Tourk: Dufty for Mayor