San Francisco Pride guides are a both necessary evil and an exercise in futility. On one lubed hand there are a million things to do and hundreds of locals and carpetbaggers alike that want your queer three-dollar bills – making it a maze of events and transit.

On the other hand, you don’t need Captain Obvious to tell you that to celebrate, you only need to leave your house, hotel room, or hipster coffeehouse (or the Marina – though Marina girls need not apply. Marina girls: if you come, we will burn your Kate Spade everything on a pile of your printed scarves. That is all).

Start by reading Run, Alejandro, Run – this definitive SF Pride Guide gives you all the tips you’ll need for finding good food around the clock, how to dress for SF’s bitch-on-heels weather, where to buy sex supplies 24/7, sexy clothes and outrageous sex toys, why you need to visit our kinky coffee shop Wicked Grounds, and pretty much anything else you’ll need to supplement this year’s SF version of Queers Got Talent.

Better yet, get yourself a limited edition Pizzeria Delfina SF Pride shirt, with all proceeds going to the Dyke March. Delicious, delicious pride.

The Main Events Are Not All In Your Pants

The main events are a trident of public events: Trans March (Friday), Pink Saturday / Dyke March, and Pride Parade Sunday (parade, entertainment stage and festival booths). Stay hydrated, wear sunscreen, and don’t wait to pee: there will be portapotties everywhere, but we all know how well that works out…

Trans March 2011 is on Friday June 24, and begins at 3:30pm in Dolores Park. At 3:30 people gather, a stage features performers and personalities, and then at 6:30 the march begins to the UN Plaza, with the official after party at El Rio from 8pm-2am. Unofficial after parties are at the Lexington and the Elbo Room; my g-string-seeking money’s on partying with some of the Original Plumbing crew at the Elbo if it’s not too packed to get in.

The Dyke March 2011 is on Saturday June 25, with participants gathering at Dolores Park between 3-7pm, at which point the bikes are revved, and the march takes over the Mission, finishing on Market Street for Pink Saturday celebrations. Booze is officially banned this year, but revelers will be greeted with food booths, entertainment and a Market street closure from 5:50pm-1am. Yes, Dorothy, they will tow you fast and furiously. On Saturday there are also the noon-6pm official SF Pride events (Pink Saturday is “unofficial”) at the San Francisco Civic Center downtown.

SF Pride 2011 Sunday is the big day: the festival in Civic Center goes from 11am-6:30 pm, while the parade takes over downtown, Market Street and a lot of SOMA as it kicks off at 10:30 am at Market Street and Beale, ending at Market and 8th Street – on its own time, sorta. This year’s main stage star is Sandra Bernhard.

I’ve been in it a few times and I can tell you that it always starts late, runs long, and you better wear sunscreen no matter how foggy and cold you are (or watch it livestreamed, uncensored, here). And – bring tissues, because the amount of love, acceptance and family you’ll witness will make your hard little heart soften up. I cry happy tears every year, and I’m man enough to admit it.

San Francisco Bay Guardian and 7×7 Magazine have enough parties and events to make your wide eyes glaze over with a Pride-like substance, with the Guardian having the most complete list.

Pride May Be A State Of Mind, But SF Taxis Suck

Getting around SF during Pride is not to be taken lightly. Do not rent a car. Do not drive anywhere. If you have a car, park it on Friday afternoon in a safe place and leave it until Monday.

Our taxis are never around when you need them, and not always nice, especially to the LGBTQ among us. My top pick is always Luxor, but you don’t want to depend on cabs. New options for taxis this year include LGBTQ-positive/safe Homobiles at (415) 574-5023 (YAY!) and the expensive but ultra-sleek Uber cabs (my favorite).

Wear walking shoes (or keep an extra pair in your bag), and buy Muni passes as you need them – or if you’re in town for more then three days, get a Clipper Card which can be auto loaded online, and used on any of our local public transit systems.

I highly recommend that you make yourself a personal, private Google Map (in “My Maps”) and add pins into all the places and events you think you might want to go. If you want to get down and nerdy, and have a smartphone with Google Maps, make a different Map for each day and then you can view them as Layers.

Go to the parade and visit the booths – it’s $5 to get in, but totally worth it.

As for the Pride Parade itself, I’m truly intrigued by the Bradley Manning SF Pride Parade Contingent, for those marching in support of the alleged “WikiLeaker” whom is openly gay, spoke out about DADT and is currently imprisoned. More info is on their Facebook event page. 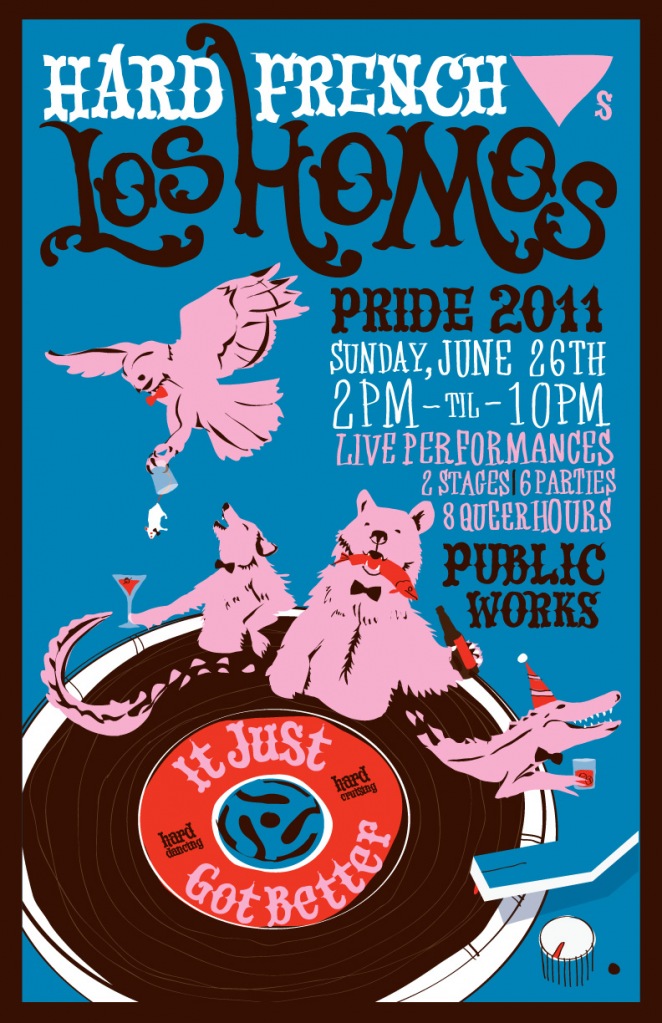 Viva sissy bounce! If you’re not familiar with sissy bounce (Where have you been since 2008!? FIX THIS!), it’s a mind-blowing queer rap genre from New Orleans – and it’s crazy-fun. From 2-10pm on Sunday, check out the daylong lineup of Hard French Hearts Los Homos (It Just Got Better) at Public Works (161 Erie, $15 pre, $20/door). Big Freedia is in the house, so get ready for Azz Evereywhere!

If there’s only one party you can go to, then make it Queerly Beloved, from 3-9pm at El Rio (3158 Mission, $8). It’s queer pornographer and star Courtney Trouble’s third annual Pride party “for the rest of us” that features a wet t-shirt contest, go-go dancers and the hottest queers on the planet frisky and letting it all shake, jiggle and hang long, proud and loose for all to enjoy.

At This Is What I Want 2011, an official performance festival of the 2011 National Queer Arts Festival, “acts of art-making and acts of sex collide” Monday-Thursday at 8pm, a href=”http://theoffcenter.org/?p=1200″>ticket details are on their site.

If you’re still around, don’t miss Tuesday’s 9pm (free) screening at the Castro Theatre of surprising documentary, Screaming Queens: The Riot at Compton’s Cafeteria. It’s a little-known fact that the riot at Compton’s in the Tenderloin (San Francisco) was an out-of-control backlash against the SFPD’s ongoing trans- and drag-queen harassment – and it predated New York’s infamous Stonewall Riots by three years. The screening is free, thanks to KQED, and since this year’s Trans March is in honor of the 45th anniversary of the riots, it’s well worth checking out the incredible back-story. The Stonewall Uprising is also screening free that night at 7pm.

Got to stay another day? Yay! Go to the Booksmith in Upper Haight at 8pm (free) and see legendary Bob Mould sign and talk about his unapologetic new memoir, See a Little Light: The Trail of Rage and Melody. Many know him as the onetime frontman of Hüsker Dü, but less might be aware of his struggle coming to terms with being gay, his bandmates’ attitudes and his own indie music work. Combine that with his unflinching ability to construct an entertaining narrative around his own pain and triumphs and it should be a hell of an event.