The People Behind “Run Ed Run” Stepping Out From The Shadows 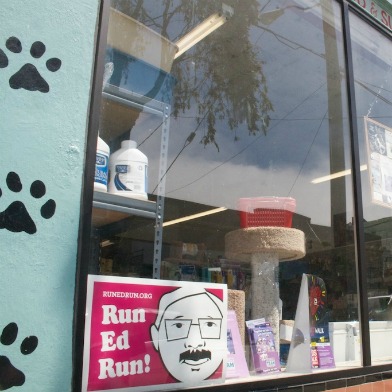 Far from being a mysterious manufactured movement engineered by shadowy kingmakers (ok, just Willie Brown and Rose Pak), the campaign to draft interim Mayor Edwin Lee to run for a full four-year term in November is real, and run by real people. Some real political people, it turns out.

Consultant Enrique Pearce of Left Coast Communications, which organized RunEdRun.org (the subject of some controversy of late, some of which unfolded on this very site), said that any allegations that the campaign is “astroturfing” — making it appear Ed Lee has grassroots support when he does not — are absurd, a fact belied by the people behind the campaign.

“The truth of the matter is, I think we have more people signed to our petition than any other candidate [who may submit signatures in-lieu of a filing fee],” Pearce said Monday.

“Dare I say, there’s probably more support out there for Ed than any other potential candidate.”

Shelly Bradford-Bell, a former executive director of the Bayview Opera House, is also on board, Pearce said.

Earlier news reports had questioned the openness of the efforts to draft Ed Lee. When approached by LGBT blogger Michael Petrelis during a photo shoot for the campaign last week, Pearce had identified himself only as a volunteer.

The RunEdRun web site, which went live over the weekend, is registered to an address in Spain, and the only name connected on public records to the Progress for All coalition campaign committee, the committee to which the Run Ed Run signs are linked, is a Ceazar Cabreros of Oakland.

Cabreros is a campaign volunteer, Pearce said. “There’s no secret to this, no mystery,” he said. “We’ve very public about it — do we want to see Ed run for mayor? Yes, the answer’s yes. There’s no charade here.”

A campaign to draft an active politician to run for an office doesn’t necessarily need to register a campaign committee — it does need to register, however, if it raises or spends over $1,000, according to Ethics Commission executive director John St. Croix.

Any group of volunteers can do whatever it wants — hold signs, collect signatures — without registering a committee, but as soon as funds are raised, a committee must be formed, St. Croix said.

“Keep in mind, however, that this has never happened before,” St. Croix said. “This is an area we don’t have a lot of experience in.”

Political watchers will leap at the mention of Chin’s name. Chin is very close to the Chinatown Chamber of Commerce’s Rose Pak, who, with former Mayor Willie Brown, was seen as instrumental in placing Lee as interim mayor.

Chin was also an active and vocal supporter of former CCDC employee Jane Kim, whose successful supervisorial campaign in the fall was run by Pearce.

But it’s the inclusion of Olague’s name that will make the city’s progressive establishment feel ill. Olague, you may recall, was active in the 1990s with the Mission Anti-Displacement Coalition with the likes of former supervisor Chris Daly, who has made opposing efforts to draft Lee a key mission (and the subject of a Beatles-influenced Facebook page, Let Ed Be).

A call to Olague’s cell phone was not immediately returned. The Appeal left a message for Chin at the CCDC’s main office.

It will be some time before public records reveal exactly who the financial backers are behind the Progress for All/Run Ed Run effort. The first filing deadline for the 2011 calendar year isn’t until the last day of July, St. Croix said.

“That’ll be everybody’s first wide glimpse of all the money that’s floating around,” he said.

In the meantime, the volunteers — no paid signature gatherers — behind the Run Ed Run effort will continue to harness the groundswell behind the former City Administrator despite “people taking down our signs and boasting about it on Facebook,” Pearce said.