Martha, The Palace Of Fine Arts’ New Baby Swan “not afraid to get her feathers ruffled” 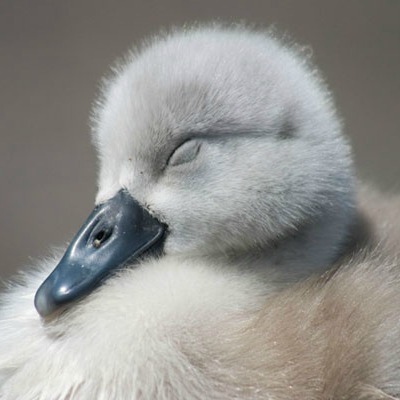 With three more eggs to go, the first of the Palace of Fine Arts’ latest residents has been hatched. Martha, a baby swan or cygnet, was hatched on Memorial Day. Martha’s mother and father, Blanche and Blue Boy, met last January and according to Rec and Park, it was love at first sight.

Hagerty says that the remaining three eggs should hatch within the next couple days, unless they are infertile, in which case they’ll be removed. In the meantime, Rec and Park is reveling in the cuteness of the new addition to their swan family.

Says Rec and Park General Manager Phil Ginsburg in a statement, “We are so excited and thrilled to have Martha as part of the Rec and Park family. We are thankful for all the love and care that our staff and volunteers provide for our animals.”

Gayle Hagerty, who has been caring for swans at the Palace of Fine Arts for 18 years, says that though days old, the baby swan is not afraid to get her feathers ruffled. Martha is already very active and spends her days swimming in the lagoon.

But like most new parents, Blue Boy and Blanche keep a watchful eye over their cygnet.

“Blue boy is incredibly protective. If you go near the nest or Martha, he’ll just come right up after you,” she said. “He looks scary.”

Of course, most newborns and families need their privacy so Rec and Park staff and swan volunteer caregivers ask that you give them space so as to protect the swan family and their eggs and not disturb them. The nest is sectioned off with a small fence to prevent anyone from tampering with the eggs, San Francisco Recreation and Park spokeswoman Connie Chan said.

If the eggs do not hatch, the family of three will be the only swans in the lagoon.

Bella, a 2-year-old swan who fractured her webbed foot last month, is still recovering at her birth home in Point Reyes.

Jack Long, the exotic bird breeder who is caring for Bella, said she is “perfectly well” and he anticipates her return to the Palace of Fine Arts lagoon in the next few days.

“Hey, I want to go. Jack treats me real nice, but I want to see my buddies,” Bella writes, proving that her foot has healed.

Before Bella returns, some of the rocks in the lagoon, which Long suspects she caught herself between, might be removed.

Hagerty said she hopes Bella’s return will bring balance to the swans at the Palace of Fine Arts with the coupling of the two pairs.

Rachel Purdy of Bay City News contributed to this report