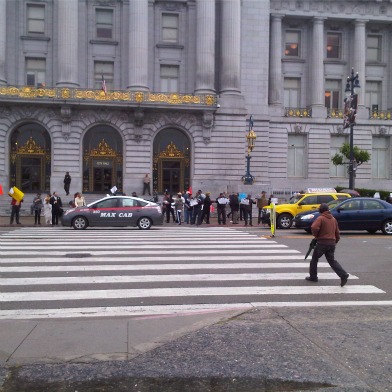 As we’ve previously reported, thanks to a 5% fee on all credit card transactions, cabdrivers might be kind of losing it with San Francisco. Add to that strong opposition to new waybilling equipment and televisions being installed to blare advertisements at passengers and you get a very disgruntled group. Holding them together in the face of all this is a plan for SF’s cab drivers to strike next Tuesday.

June 21 is a busy day for SF. With six conventions in town, including one expected to draw up to 10,000 people and another Giants home game (they’ve been selling them out all season), drivers are hoping that their action will “create awareness about the problems facing our industry.”

After threatening a strike for over a month, the Ex reports that cabdriver Tariq Mehmood says and all drivers are called upon to participate in Tuesday’s civil action. So far, drivers organization United Taxicab Workers have signed on to the protest, which is designed “to make taxi gridlock,” Mehmood told the Ex.

However, many feel the strike won’t do much of anything but allow those cabdrivers who are still working to capitalize on the lack of competition. Says Timothy Fulkerson, a Metro Cab driver, “this will have no effect on cab passengers. The rest of the drivers will be working their regular shift and enjoying the extra business.”

Cabbies are expected to “either circle their cars around City Hall in protest or keep the vehicles parked,” reports the Ex. Mehmood did not give a specific time of the strike (all day? Just a few hours?) and did not respond to the Appeal’s request for that information by publication time.