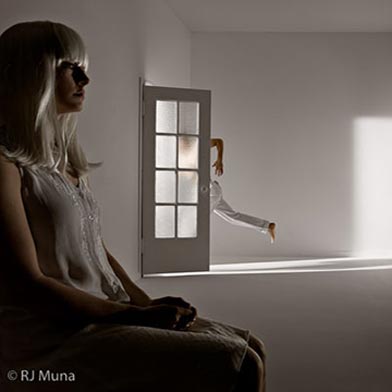 In Joe Goode’s latest piece, The Rambler, the choreographer explores the theme of an American icon in the personae of the loner and all that encompasses.

“The Rambler is about a peripatetic impulse, especially in the American West. We tend to romanticize the figure of the rambler who passes through, causes trouble, and dispenses wisdom.” Joe Goode said of this iconic character, which is examined from various perspectives and with a variety of tones from the deeply wounded to the whimsically egotistical.

The work itself is, like most of Goode’s approach, not an engagement of the intellect (which is not to say that it isn’t intelligent), but rather should be viewed through a lens of an emotional kaleidoscope.

As a creator, Joe Goode is a detached and objective reporter content with providing the truth of his work and removing all judgment. His characters don’t have arcs, they don’t examine their shortcomings nor do they seek redemption. They are lives caught in a moment like an insect frozen in amber, eternally playing out their stories in a sort of purgatory.

I felt as though these personalities were continuing their tortured and torturing roles long after I left the theater and still feel their impact now. While this production may explore the figure of the lone, cold, wanderer – make no mistake, this is a very emotional work.

While some productions seem to overindulge themselves in expressing nothing but muddy water of “feelings as story”, this is not an enterprise stuffed with unruly solipsistic angst. Rather, it’s a feat of technical accomplishment which is sober and stunning.

The ensemble pieces are clean and precise, nimbly moving from heartbreak to joy and back again. Those highlighting solo performances are fractured glimpses into the self-obsessed and obsessive, from the towering nymphomaniac to the lost soul who slowly recedes into a cloistered box of black curtain before receding into oblivion.

The technical aspects of the show were a sort of moving marvel. As someone with a fair amount of production experience, the curtain choreography was an impressive execution. At one moment the stage was an open tundra and suddenly three curtains worked seamlessly to create a sort of moving frame that focused and intensified the action wherever Goode chose. It was one of the most cinematic uses of theater (without using video) I’ve ever witnessed.

Basil Twist, who created the sparse and effective scenic design and Jesse Olsen Bay’s emotionally gratifying score should both be commended for having the ability to fulfill the choreographer’s mystical vision into a concrete work.