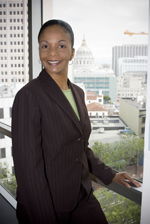 An interim San Francisco Municipal Transportation authority chief has been named for when the outgoing CEO leaves the agency on Thursday, the SFMTA board chairman said in a staff letter today.

Debra Johnson will serve as the acting SFMTA executive director and CEO when Nathaniel Ford officially departs on Thursday.

Ford announced his resignation about two weeks ago, two and a half years before his contract’s end. He received a separation package of about $380,000 that includes a year’s salary, deferred compensation and unused vacation time.

Johnson has been working with the MTA since 2007, first as chief of staff and director of external affairs and currently as director of administration, taxis and accessible services, according to MTA board chairman Tom Nolan.

Johnson was selected as an interim head of the agency after deputy executive Carter Rohan a week ago announced his resignation from the agency, effective July 23. Rohan, as the SFMTA’s second-in-command, would have served as interim executive director upon Ford’s departure.

A permanent successor will be selected after applications from interested job seekers are reviewed–hopefully before Rohan’s final day, Rose said.

Nolan said that before the interview process starts, the board is surveying SFMTA employees on what they want in their next executive director.