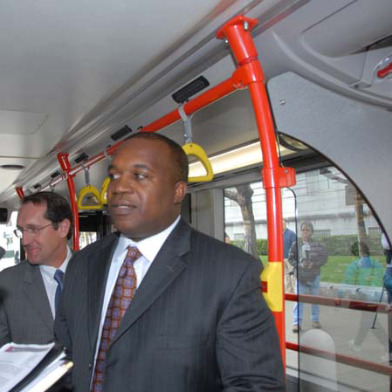 The San Francisco Municipal Transportation Agency approved a separation agreement for executive director Nathaniel Ford this afternoon at a board meeting in City Hall.

Nathaniel Ford, the transit agency’s executive director and CEO, announced last week he was resigning two and a half years before his contract’s end. The board of seven directors unanimously passed and certified Ford’s resignation.

Chairman Tom Nolan has opened the executive director position to a nationwide search. Letters of interest will be accepted through July 1. The board will not hire a search firm, Rose said.

A special meeting will be held on July 19 to discuss the search process. Rose said the board wants to have someone in place by the time Rohan officially resigns at the end of July.

Also at today’s board meeting, a representative from Senator Leland Yee’s office presented a petition with more than 1,200 signatures to oppose a $384,000 severance package for Ford.

“San Francisco taxpayers and Muni riders deserve better than a completely out-of-touch public agency,” said Yee, who is a mayoral candidate in the November election.