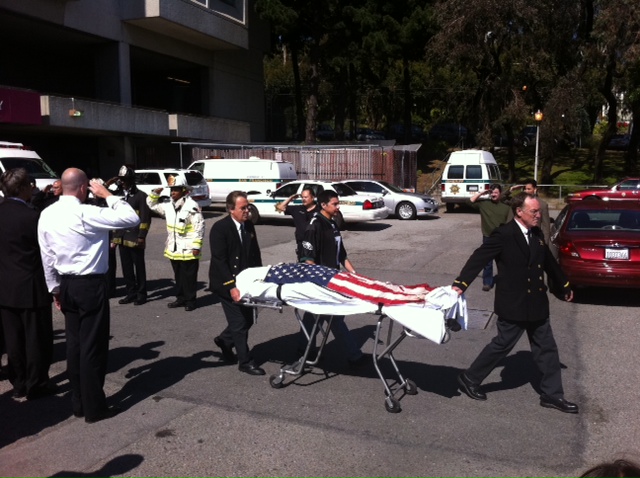 San Francisco firefighters gathered to mourn the loss of one of their own this afternoon after a 21-year veteran of the department died after being injured while batting a blaze in the city’s Diamond Heights neighborhood earlier today.

Lt. Vincent Perez, 48, was one of three firefighters injured in the blaze, which was reported at 10:44 a.m. at a four-story home at 133 Berkeley Way.

All three were taken to San Francisco General Hospital where Perez died at about 11:50 a.m.

One of the other firefighters, identified as firefighter/paramedic Anthony Valerio, 53, remained in critical condition this afternoon, Fire Chief Joanne Hayes-White said at a news conference held at the hospital.

The third firefighter, a woman whose name was not immediately available, was treated at the hospital for smoke inhalation and minor burns and was released.

Hayes-White said Perez was a classmate of hers when they entered the department’s academy in 1990. She said he previously served as a deputy with the Alameda County Sheriff’s Office and as a U.S. Marine.

“His whole life was spent serving the community,” she said.

Dozens of firefighters gathered to salute Perez as his body was taken out of the hospital to be transferred to the medical examiner’s office for an autopsy.

“Our hearts are heavy and they will be for a long time,” Hayes-White said.

This is the first time in eight years that San Francisco has lost a firefighter in the line of duty. In January 2003, 40-year-old firefighter Melinda Ohler died after falling from a fire engine as it responded to a call.

Dispatch received the alert and notified the incident commander, who tried, but was unable, to reach the firefighter by radio, Talmadge said.

Additional crew members were sent in, and they found two firefighters down and “pretty badly burned.”

Four residents were inside the home when the blaze started, but they were all able to escape without injury. American Red Cross personnel were speaking with the home’s occupants this afternoon.

“All houses are kind of upside down,” with a story or two at the street level and at least one or two more down the hillside, O’Connor said.

“If things go wrong, you’re in the worst possible area” since the flames will shoot upward from the lower levels of the home, he said.

O’Connor said a firefighter died in another house fire in the same neighborhood in 1995.

Mayor Ed Lee came to the hospital this afternoon to pay his respects to the firefighters and their families, as did several other city officials, including police Chief Greg Suhr and Supervisors David Chiu and Ross Mirkarimi.

Lee said, “This reminds all of us how dangerous this job is” and asked for the community to pray for the recovery of Valerio, who suffered extensive burns and other injuries in the fire.

Lee and Newsom were supposed to attend a news conference this afternoon to discuss the expansion of the city’s technology industry, but the event was canceled after officials got word of the firefighters’ injuries.

Lee has ordered all flags in the city to be flown at half-staff in Perez’s honor.