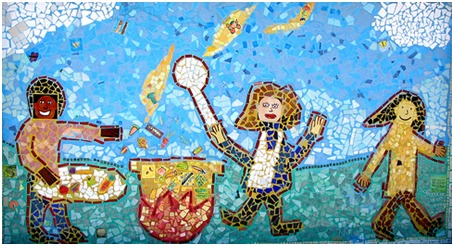 As previously reported, the founder of a local children-focused arts non-profit was charged with possession of child pornography, and surrendered to authorities last week. Now the organization’s web site’s been taken down, and San Francisco has suspended its relationship with the organization.

Anthony Josef Norris, 46, of San Francisco, the founder and director of taxpayer funded Kid Serve, which on its now-absent (you can see a cached version here) website said that it “links public art to public school curriculum,” surrendered to FBI agents last Thursday morning. He has since made an appearance before a U.S magistrate and been released on a $200,000 bond.

FBI agent Lydia Durben said in an affidavit filed with the complaint that the investigation began after child pornography videos posted on the Internet were traced to Norris’s home address.

Durben alleged in the affidavit that a search of Norris’s computer showed at least 600 images of sexual exploitation of pre-pubescent children.

As the Ex reports, local officials have now launched an investigation to see if Norris harmed any of the children involved with Kid Serve during its eleven year run.

Maria Su, director of the Department of Children, Youth and Families tells the Ex that her department has ended its relationship with the program, at least for now.

“All services and activities related to this nonprofit have been suspended,” she said.

San Francisco had spent $53,506 so far on the program this fiscal year.

Although so far there have been no complaints of Norris’ treatment of the children he worked with, his statements to the FBI don’t bode well.