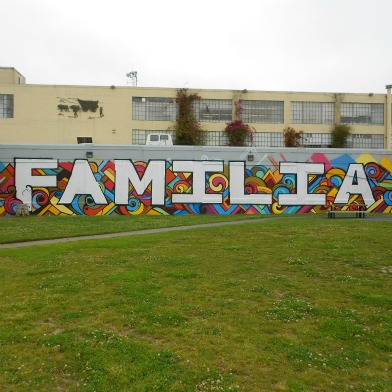 A community that came together to solve the problem of persistent graffiti at a neighborhood park celebrated the unveiling of a mural painted in the hope of staving off vandalism.

Potrero del Sol Park, which is a favorite among skaters and schoolchildren, is bordered by Buena Vista Elementary School and a building maintained by San Francisco General Hospital.

Taggers constantly targeted a wall of the hospital building, according to the city’s Recreation and Park Department. After hospital painters’ efforts to efface the wall were thwarted time and time again, the community rallied.

The school’s PTA found the artist Victor Reyes to compose a mural, and the students competed in a naming contest. The parks department waived the permit fee, the hospital donated paint and scaffolding and navigated the plan through the San Francisco Arts Commission.

The “Familia” mural, whose bright blocks of colors pop against the otherwise neutral surroundings, was unveiled at 10 a.m. Wednesday at the park located at 25th and Utah streets.

According to the parks department, the mural is the story of “a shared problem and a creative solution.”