Bystander Suffers Life-Threatening Injuries In Shooting At Sixth And Minna 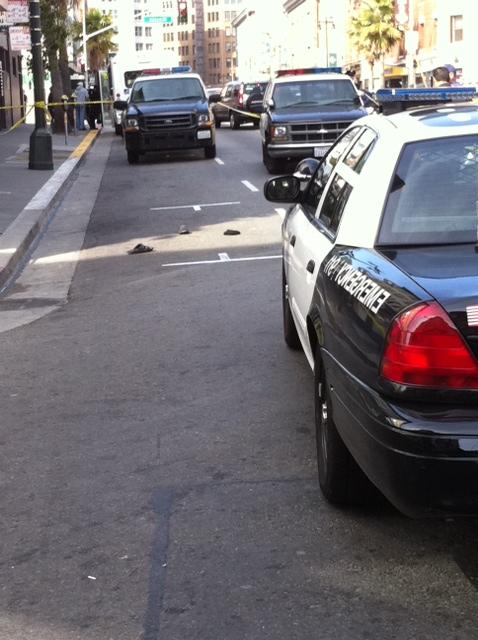 The shoes of a person who was shot in San Francisco’s South of Market neighborhood this morning remained in a traffic lane on Sixth Street at Minna Street as police investigated the crime. Dan McMenamin/Bay City News

11:08 AM: An argument between two groups of people led to a shooting that seriously injured a passerby in San Francisco’s South of Market neighborhood this morning, a police spokesman said.

The shooting occurred at about 7:35 a.m. near the intersection of Sixth and Minna streets.

One of the people involved, believed to be one of the Asian males, fired a shot that struck an unintended victim, a man in his 40s who was about half a block away, Dangerfield said.

The man was struck in the head near his left ear, and was taken to San Francisco General Hospital to be treated for his injuries, which are considered life-threatening, Dangerfield said.

The shooter may have fled in a vehicle, but police did not have descriptions of the suspect or car as of this morning.

Stevie Garcia, who lives in an apartment near the intersection, said she heard three shots this morning, and when she looked out her window, she saw a police officer wrapping the victim’s head with something to stop the bleeding.

Garcia said shootings in the area are fairly common, but not usually at that time of day.

A fight was also reported at the same intersection at about 3 a.m. today, and police are investigating whether the two incidents are related, Dangerfield said. The victims and witnesses were not cooperating with police officers who responded to the report of the fight, he said.

Garcia said she thought she heard a gunshot during the early morning incident, but police have not been able to confirm that a shot was fired.

The shooting is being investigated by the Police Department’s gang task force and officers from the Southern Station.

Anyone with information about the case is encouraged to call the Police Department’s anonymous tip line at (415) 575-4444 or send a tip by text message to TIP411.

9:56 AM: Police are investigating a shooting in San Francisco’s South of Market neighborhood this morning that left a man with life-threatening injuries, a police lieutenant said.

Police suspect the man was shot unintentionally as he was walked by three other men who were arguing at the corner of Sixth and Minna streets, Dangerfield said.

The man was taken to San Francisco General Hospital, he said.

The suspects might have fled in a vehicle, but police do not have descriptions of any of them, Dangerfield said.

Officers are at the scene interviewing witnesses and asking nearby businesses for any surveillance video footage, he said.

Stevie Garcia, who lives upstairs from where the shooting happened, said she heard three shots this morning. When she looked out her window, she saw a police officer wrapping the victim’s head in gauze.

Garcia said shootings in the area are fairly common, but not usually at that time of day.

8:56 AM: San Francisco police are at the scene of a shooting at Sixth and Minna streets this morning, police said.

Lt. Troy Dangerfield said at least one person has been shot, but he did not know the extent of the victim’s injuries.