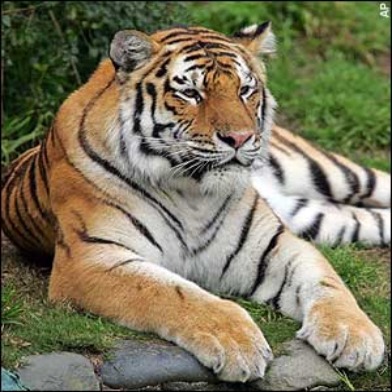 Visitors to the San Francisco Zoo got to see a Siberian tiger for the first time in more than a year today as the facility’s newest big cat, Martha, made her first public appearance.

She spent part of today on public view, marking the first time since Tony the tiger was euthanized in June 2010 that the zoo’s visitors have been able to see a Siberian tiger.

“We wanted to bring a Siberian back so people could see the difference between the two tiger species,” LaMarca said.

Siberian tigers are larger and have differently shaped faces than Sumatran tigers, which come from the island of Sumatra in Indonesia.

The San Francisco Zoo’s wild cats program has come under scrutiny since a Siberian tiger named Tatiana escaped from her enclosure on Christmas Day 2007 and mauled a visitor to death.

Tatiana was shot and killed during the incident.

Zoo officials have since enhanced the tiger exhibit with raised grotto walls and an electric wire along the interior of the moat to prevent the animals from escaping.

The zoo has been ready for a new Siberian tiger “for quite some time,” LaMarca said.

Martha was born in 2000 at the Indianapolis Zoo and spent most of her life at the Henry Doorly Zoo in Omaha, Neb., which donated the cat to San Francisco.

The cat went by “Shasta” in Omaha, but a San Francisco Zoological Society donor bid on the naming rights and chose to rename the animal after his wife, LaMarca said.

She said Siberian tigers are independent animals and do not travel in groups.

“The fact that we just have one was fine with Martha,” she said.