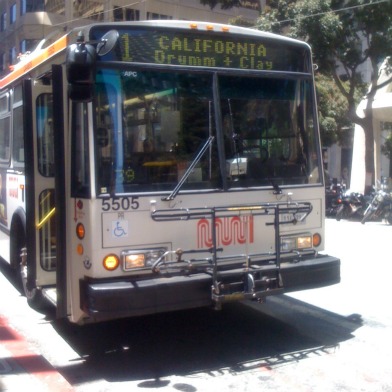 If you’ve ridden Muni or even read about Muni on the internet, you probably know this tune already: riders on a bus are suddenly delayed as, in the middle of a run, a driver hops off for coffee, food, or more. Sure, Muni drivers are just worker bees like the rest of us, and we all need a break sometimes, but most of us would argue that that break shouldn’t happen in the middle of a shift. SFMTA management says they agree, and that they’re taking disciplinary action against drivers who hop out and leave riders hanging.

Yesterday at about 1:20, an Appeal reader who asked that we not use her name wrote:

I was on the 1 California bus and then the driver pulled over at the stop at Montgomery and Clay, got out, and is now in line at the Starbucks on Clay. Weird. Guess I’m walking the rest of my commute.

Also what’s weird is that the bus appears to still be running. With all its doors open. Can I drive it?

Of course, as noted, a driver stopping mid-run for a treat isn’t a shock to most Muni-jaded San Franciscans, but that didn’t stop me from checking in with SFMTA spokesperson Paul Rose, to hear the MTA’s stance on things.

“This should obviously not happen” Rose quickly shot back by email. “We will follow up with the operator and take appropriate disciplinary action.”

Really? “Yes” Rose confirmed in a follow-up phone call. “This absolutely should not happen, we appreciate being told about it, and we’re looking in to it right now.”

One thing our tipster needn’t worry about, Rose said: an errant rider taking the bus for a joyride.

The electric trolley Muni buses like the 1 California can’t be absconded with, he says, because “the operator has a battery switch,” that he or she carries with them, that prevents others from driving it. So keep it in your pants, tipster, you’re just going to look silly when you try and fail to take the 1 for a spin.

Despite the many many posts on sites like Muni Diaries or the N Judah Chronicles detailing the disappearing driver phenomenon, Rose told me that he says that while he’s “heard about cases like this in the past, I can’t say we get regular complaints about this.”

Which, for me, raised an interesting point — how many of us do complain to the SFMTA (as opposed to our Twitter or Facebook pals, or to our fine local websites) when stuff like this goes down on Muni? If we think it’s important enough to tweet, why isn’t it important enough to also put our gripes on record? Is it because those of us (and I mean “us” here, because I am a regular SFMTA complaint filer, to the point of crankdom) who do make official complaints are rarely acknowledged? Because things don’t seem to change?

ANYWAY. Rose encourages anyone who’s on a bus or train where the driver skips out to call 311 to report it straight away. “We need details like the route number, time of day, location, and vehicle number” to investigate, Rose said.

Our tipster provided all those things, as well as the picture of the stopped bus you see in this post, which is why he says Muni could follow up with the driver. You can’t just say I was on the N during rush hour and expect results, he said. The more details, the better. (And, of course, we’d love to hear your complaint, too, so drop us a line with the details!)

Once you do that, Rose says, the SFMTA will question the operator, who’s of course entitled to present their case, Rose said. Then there’ll be a personell hearing and, if warranted, disciplinary action which (“in the general sense,” Rose says) can be “anything from retraining to termination.”