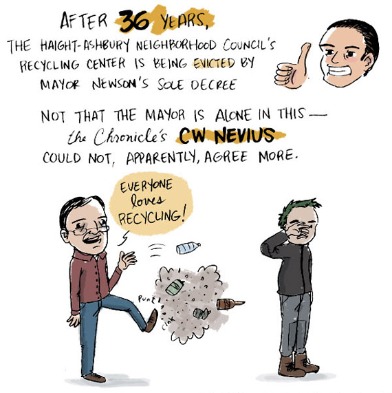 As we’ve previously reported, the Haight-Ashbury Neighborhood Council Recycling Center has been dangerously close to the end since then-mayor Gavin Newsom order its closure. Now it seems that although the HANC center still has to go, it’ll get one more month to clear out.

As the Ex reports, the city is giving the center one final month. That decision comes after a Superior Court judge declined ruling on HANC’s assertion that SF’s Recreation and Park Department was unlawfully evicting them. Back in December, Rec and Park originally only gave the center until March 4 to vacate but HANC’s been fighting the removal ever since.

According to HANC lawyer Robert De Vries, the center’s lease allowed it to stay until the end of June. The recycling center’s been around for 36 years and although it has been a helpful part of SF’s campaign to increase recycling, it reportedly only handles a fraction of a percent of the City’s total recycled materials. Since the dawn of widespread curbside recycling, centers like HANC’s have been slowly dwindling.

Although the City has extended an offer to HANC to rent space at Pier 96 in the Bayview, logistics are still hazy. Meanwhile, Rec and Park plans to turn the space into a community garden.