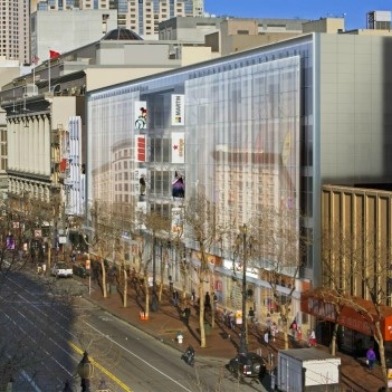 Sometime in 2010, it became abundantly clear that Zendesk had outgrown it’s office space. The tech firm, which specializes in cloud-based help desk software, was running out of ways to create enough ad hoc workspaces to “comfortably” fit all of its employees. Zendesk searched high and low for new digs, but everything they saw in SoMa and the Financial District was simply too pricy. But when their realtor showed them a spot on Market near 6th Street, they were immediately smitten. It was spacious, had a design they were head over heels for and, most importantly, it was dirt cheap. The company already thought the mid-Market space was a near-perfect fit when Twitter threatened to drop its big old fail whale on the city of San Francisco and, in the process, made Zendesk’s good deal impossible to pass up.

When Zendesk’s imminent move to mid-Market is complete, the firm will become the first to take advantage of the infamous “Twitter tax break” and move into a neighborhood city officials say they are working overtime to transform.

Efforts to change what Appeal contrib Susie Cagle referred to as “the gap-toothed face of Mid-Market” have been going on for years. However it was only recently, when the micro-blogging giant threatened to hightail it down to Brisbane, that efforts to bring exciting, young companies into the neighborhood became front page news.

With speculation high that Twitter is likely to go public in the next few years, it’s been suggested that the high-profile IPO of the company linked to fomenting pro-democratic revolution in the Middle East, the downfall of a powerful congressman (and his wiener) and reminding the world that both Bronson Pinchot and MC Hammer are still alive is going to be the biggest thing to hit NASDAQ since Google went public in 2004.

The money generated by Twitter’s IPO would be huge, and the small chunk of it siphoned off by San Francisco’s 1.5% city payroll tax was enough to make the company strongly consider fleeing to the South Bay. The city wanted to keep Twitter, and the estimated 2,000+ jobs its expected to generate over the next decade, in San Francisco. (Not to mention Twitter’s largely San Francisco-based workforce was probably less then enthused about the prospect of commuting down to Brisbane every day).

So, as often happens in these situations, the city played Let’s Make a Deal. Twitter, and any other pre-IPO company of its ilk, could get a temporary exemption from the payroll tax if the firm moved into an office in the mid-Market area. With help from City Hall, Twitter signed a deal agreeing to move into a space on Market at 9th Street and Zendesk, already jazzed about moving to mid-Market in the first place, got to reap the collateral rewards.

“The city never approached us,” said Zendesk Community Manager Tiffany Maleshefski. “Our realtor was just hip on what was going on at a city level. And she had been looking at that area even prior to the legislation as it was cheaper for us.”

The “Twitter tax break” isn’t the only incentive the city is offering businesses to move in. There are also two redevelopment zones (one on Market Street itself and one running down 6th Street) that yield further tax savings as well as the Central Market Cultural District Loan Fund, an $11.5 million pool of city money set aside to provide low-interest loans to businesses moving into the area.

“We live in a city, and I think everyone who lives here knows those areas exist and aren’t too shaken up by it”

Mid-Market is a blighted neighborhood in one of the most prime locations in all of San Francisco, so it makes sense that the city would want to turn it into someplace that, at the very least, tourists would feel safe walking through during the middle of the day. Yet, what City Hall has planned is wildly more ambitious. The ultimate goal is to create an arts-focused, West Coast version of Times Square. The vision is to turn those handful of blocks into the Bay Area’s central hub for the for live music, art, theater and dance–with properties like CityPlace Mall and a bevy of the Bay Area’s most exciting high tech companies gobbling up the rest of the real estate.

In a recent study conducted by the theater advocacy group Theatre Bay Area, a full quarter of the theater and dance companies surveyed were at least considering a move to mid-Market. While interest on the supply side of the equation is clearly present, matching that interest on the demand side may prove more difficult.

A quick jaunt down the Market Street of mid-2011 makes abundantly clear just how far the city has to go. The corridor is lined with boarded-up storefronts, head shops, strip clubs and a homeless element likely to scare away both potential arts patrons and the white collar tech workers the city is so hungry to attract.

“The Mid-Market area was certainly a colorful (to put it kindly) place to work,” says Erin Sozanski, a Buffalo native who spent two years working at a mid-Market non-profit. “While I worked on Market Street for two years, our building was broken into many times. Sometimes it was by people who seemed to just need a place to stay (nothing was stolen or vandalized but there were hypodermic needles, cigarettes and strawberry milk containers left behind). Other times the entire hallway was covered in graffiti and things were stolen from the other organizations in the building.”

To help with security, the city is putting in a new SFPD substation on 6th Street, just off Market–which should go a long way in increasing police presence in the area. The station is expected to open early next year.

“I mean, personally, I worked on 6th and Market in 2001, and while there’s no question it is a VERY distressed neighborhood, that area has come a long way,” says Maleshefski, shrugging off some of those safety concerns.

“We live in a city, and I think everyone who lives here knows those areas exist and aren’t too shaken up by it. Again, not trying to downplay the seediness of that area, but look at everything that’s moved to that area recently…[you can see that the neighborhood] has significantly changed.”

Basic safety issues haven’t been the only criticisms the plan has run up against. Interestingly, until the payroll tax incentives drew a lot of media attention, there was virtually no coordinated opposition to mid-Market’s redevelopment. However, once the media circus descended and kicked up San Francisco’s predictable anti-corporate fervor, all the added attention helped sprout a whole host of new criticisms–such as all the issues surrounding bringing a flurry of new, largely car-based activity to San Francisco’s single busiest public transit corridor.

Additionally, allegations arose that the city’s interest was primarily in cooking up sweetheart deals for powerful, well-connected real estate interests. The billionaire real estate developer who owns the space Twitter is moving into gave Gavin Newsom steeply discounted office space for his Lt. Gov campaign only days after his mayoral administration not only ushered in the tax breaks that convinced Twitter to move into one of the developer’s buildings, but also facilitated the very negotiations that made the deal possible.

In a general sense, this type of landlord-tenant facilitation might be a crucial component in turning mid-Market around. Putting on small scale live theater isn’t exactly a high margin business, so any performing arts organization looking to carve out their own nook in the city’s hot new arts hub likely won’t have a whole lot of money to burn. If the hundred or so theater companies interested in moving in all suddenly decide to inquire about real estate within spitting distance of Show Dogs, rents would skyrocket and price out nearly everybody. The city, acting as an interested third-party, can negotiate while simultaneously keeping in mind the companies’ desire for affordable rent and the landlords’ desire for full occupancy.

Even so, if the neighborhood gentrifies along the lines the city is planning, rents will inevitably go up–which, critics say, could prove problematic both for the area’s many current low-income tenants and any of the small arts organizations that move in and would then be unable to afford to stay in an area made more expensive by their presence. Another reason why having a third-party advocating for the incoming arts organizations is crucial.

Most of the low-income housing in the mid-Market area consists of single room occupancies, which are highly regulated by the city and whose tenants are protected not only from rent increases but from being kicked out and having their buildings turned into expensive condos.

While Zendesk is on the front lines of businesses moving into the neighborhood, a handful of arts organizations have already started making their mark. The Black Rock Arts Foundation, the people who put on Burning Man, have moved in, as have the digitally-focused art collective Gray Area Foundation for the Arts. Bay Area institution American Conservatory Theater is eyeing a lot at the corner of Market and Turk to transform into a compound with a 300-seat theater, rehearsal studio, cabaret and retail.

Whether the city’s audacious vision for a new Market Street will eventually become a reality remains to be seen; a litany of obstacles still stand in the way. Even if nothing else comes to pass, they’ve already got Zendesk–and that seems like a very promising start.