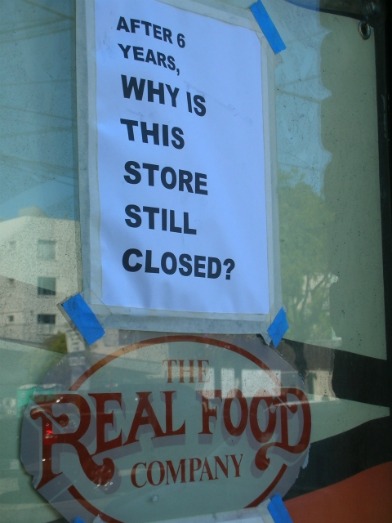 Nearly a decade after its sudden closure, the old Real Foods storefront in Noe Valley remains vacant, Noe Valley SF reminds us today. Located on a prime patch of 24th Street, Noe Valley’s main drag, the organic grocery store was popular in its day and its sitting unused for so many years is a source of aggravation for many Noe Valley residents.

The store has been shuttered since it unexpectedly shut its doors on Labor Day in 2003, leaving its customers, suppliers and dozens of laid-off workers out in the cold.

Nutraceutical, the grocery store’s Utah-based owner, initially claimed it was only closing to remodel and that the store would reopen shortly. However, when that reopening failed to materialize, employees claimed that the store was closed to abort an attempt at employee unionization.

In the year after their termination, the laid-off workers filed a complaint against Nutraceutical with the National Labor Relations Board, which resulted in the their receiving nearly $400,000 in back pay.

In 2007, Nutraceutical said it was working to redevelop the space as a mixed-use commercial-residential property but, thus far, nothing has come of the the plan despite neighborhood exhortations that the company do something with some of Noe Valley’s most prime commercial real estate.

Since Real Foods closed, a Whole Foods has opened up across the street, rendering the idea of reopening the space as a grocery store considerably less attractive.

The store’s staying closed hasn’t been the result of a lack of effort on the part of neighborhood leaders. Getting the company to do something with the space has been a constantly battle for Noe Valley’s supervisors since 2003.

“It’s kind of an unbelievable situation,” said former Supervisor Bevan Dufty, who spent years trying to convince Nutraceutical do something with the property.

“I have bent over backwards to open the door and ask that they make an effort to work with the community, but they have not given it any consideration. I try to think of what else I could possibly do, but I have not been able to devise a strategy.”

Supervisor Scott Weiner recently told Noe Valley SF, “Real Foods is anything but ‘low priority.’ It’s a thorn in the neighborhood’s side, and I want to remove that thorn. I’m trying to figure out if there’s a better way of communicating with Real Foods. I’m also trying to figure out if we can get them to sell the building so it can be transformed into a useful part of 24th Street.”

As of the time of publication, Nutraceutical has not responded to requests from the Appeal for comment.

Neighborhood residents’ suggestions for what to do with the space have ranged from a pre-school to a storefront location for the locally beloved Elizabeth Street Brewery.

If you have any other suggestions for what to do with the space, leave them in the comments.