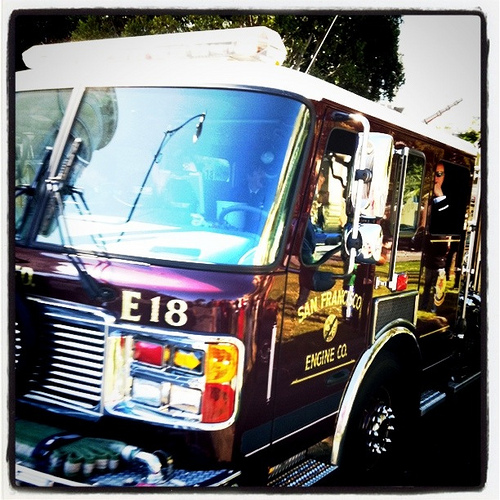 At St. Mary’s Cathedral in San Francisco, where thousands of public safety officers gathered today to honor two firefighters fatally injured in a blaze last week, men and women in their dress blues lined the back of an over-flow room where all the seats were full.

About halfway through the 3.5-hour service, two firefighters stood up and offered their seats to men who had been standing for a long time. The firefighters had to imply they were leaving the room to convince their colleagues to sit down.

It was the kind of cooperation and selflessness that seemed to run like a thread through the funeral of fire Lt. Vincent Perez, 48, and firefighter-paramedic Anthony “Tony” Valerio, 53, of Station 36, who were burned while fighting a fire in the Diamond Heights neighborhood June 2.

Perez died shortly after the fire, and Valerio succumbed to his injuries two days later.
Police and firefighters from across the country and beyond gathered to remember the men–one talkative and one taciturn, but both choosing daily to put their lives on the line to help others.

“On the outside they seemed pretty different,” fire Chief Joanne Hayes-White said during the service. “But both shared an unwavering tenacity and unwillingness to give up on what they believed in.”

Perez was a “fireman’s fireman,” Local 798 President Lt. Tom O’Connor said. He served in the U.S. Marine Corps and was big, strong, and aggressive; the rest of the company looked up to him, O’Connor said.

One time, Perez ran an entire city block with a fire hose in search of a water source because his crew had encountered a dangerous fire that was burning above and below them.

He saved all three of his men as a result, O’Connor said.

Oakland police Sgt. Alex Perez, Vincent’s younger brother, said the family was surrounded by violence when Vincent was growing in Bernal Heights, but that his brother was a good role model. Vincent loved to restore old cars and go cruising in the Mission District, Alex Perez said.

He was also loving and sentimental, despite his professional demeanor, their sister Maryleen Perez said.

“He got a great deal of joy and fulfillment from living a life of service,” she said, adding that he loved the men who worked under him.

Valerio, by contrast, was as outgoing as Perez was stoic, his best friend of 30 years, Brian Hager, said.

The San Francisco native started his career as a paramedic in Oakland before leaving for the San Francisco Health Department, which merged with the fire department in 1997 to provide emergency response services.

Valerio then completed cross training with the fire department and eventually wound up at Station 36.

“He was the best part of many people’s worst day,” said Hager, who met Valerio when they were co-workers in Oakland in 1980.

Valerio called himself the “people’s paramedic” and wore a ponytail, Hager said. He loved surfing, sailing, diving and running, and was famous for his urban chicken farm and unparalleled sourdough bread baking skills.

“Before he shaved his mustache, we used to search the world over for a Freddy Mercury look-alike contest for him,” Hager said. “He would have been a shoo-in.”

Mayor Ed Lee also spoke at the funeral, which was attended by House Minority Leader Nancy Pelosi and other elected officials. Lee said he was profoundly sorry to the Valerio and Perez families for their loss.

“The best tribute we can give is rededicating ourselves as citizens in honor of them,” Lee said.

Also in attendance were police and firefighters from as close as Oakland and as far as Dallas, Boston, Mexico and Canada.

Matt Vaitiskis was one of five firefighters from Boston who came to show solidarity with the San Francisco department.

“This is what we do,” Vaitiskis said of the trip. “They would do it for me.”

In December, two firefighters were killed in Chicago when a building collapsed, said Tim O’Brien, another firefighter who had traveled cross-country for today’s ceremony.

Several San Francisco firefighters attended the Chicago memorial, along with others who battled snow and airport closures to arrive from other cities.

“You’re looking at all of my brothers,” O’Brien said as the police and firefighters waited for the funeral procession to arrive at the cathedral.

“We live together, eat meals together, cook together, scrub floors together,” he said. “At the end of the day we might walk into a very bad situation together.”