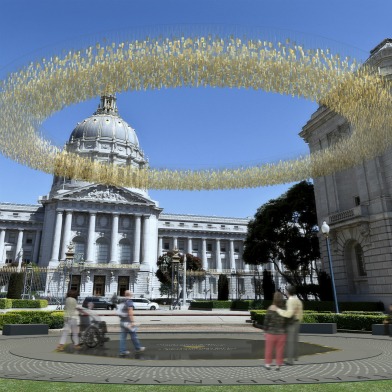 Three final design proposals for a veterans memorial in San Francisco’s Civic Center were made available for public viewing Wednesday.

The memorial will eventually be built at Memorial Court, located between the War Memorial Opera House and the Veterans Building. A veterans memorial was planned there when the court was completed in 1936, but was never installed at the site.

On Tuesday, officials unveiled the three proposals at a news conference attended by former U.S. Secretary of State George Shultz, one of the heads of the San Francisco Veterans Memorial Project, according to Elizabeth Murray, managing director of the War Memorial complex.

Of the three designs, two of which include reflection pools and other monuments while the third includes a wreath made of gilded military dog tags suspended on cables attached to the Veterans Building and Opera House on each side of it.

The designs were released on www.sfveteransmemorial.org Tuesday, and were made available for public viewing at the Veterans Building at 401 Van Ness Ave. starting at noon Wednesday.

They will be on public display from 8 a.m. to 8 p.m. daily through June 22, according to Murray.

People looking at the designs in the building’s lobby will be able to give their opinions on comment cards provided at the display, Murray said.

Since the designs were put on display earlier today, “we’ve had people constantly around the models,” she said. “We are delighted at what appears to be a big public interest” in the memorial.

The winner of the design contest will be announced next month, Murray said.

On June 27, the Veterans Memorial Steering Committee, headed by Shultz and former Secretary of Defense William Perry, will make its recommendation for which design should win, and the War Memorial’s Board of Trustees will make the final decision at its meeting on July 14.

The memorial is planned to be formally dedicated in 2012 on Nov. 11, Veterans Day.

For more information about the project, visit www.sfveteransmemorial.org.