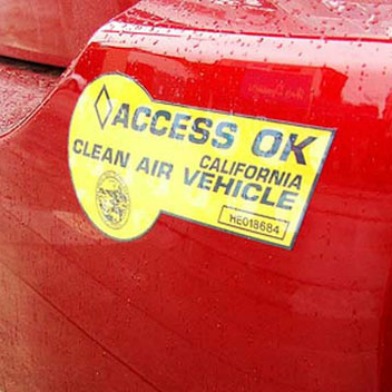 Hybrid drivers will have to be satisfied with their gas savings and sense of moral superiority this Friday, as one of the advantages to driving their type of vehicle is going away.

As the Ex reports, California’s “yellow-sticker program” gave around 85,000 California cars the option to travel in carpool lanes, regardless of the number of passengers.

Senator Fran Pavley of LA authored the sticker legislation and believes that its success spawned the purchasing of countless hybrid vehicles, but agrees that after two extensions of the program, it’s time to move on. The yellow-sticker program will end this Friday, July 1.

According to a CHP spokesperson, however, the stickers needn’t be removed, “Just stay out of the lane,” the spokesperson told the Appeal.

The current fine for violating carpool lane rules is a hefty $381 ticket.