SF Zoo Hippo “Brian Wilson” Celebrating His Birthday This Weekend, What Did You Get Him? 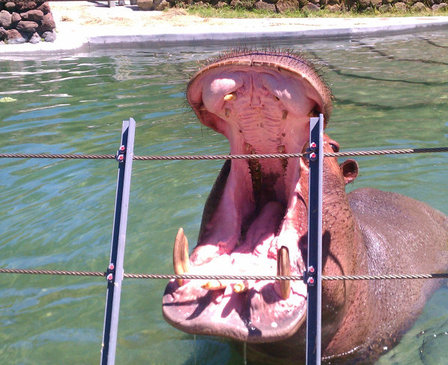 Fear the beard, but don’t fear the hippo.

A hippopotamus at the San Francisco Zoo recently renamed after San Francisco Giants pitcher Brian Wilson–who is famous for the jet black beard he grew during the team’s World Series run last year–is celebrating his birthday this weekend.

The hippo, also nicknamed “The Beard,” will celebrate his eighth birthday–the first he has spent in San Francisco since being relocated from the Topeka Zoo in Kansas.

The animal, previously named Tucker, came to San Francisco in January after impregnating the other hippo at the Topeka Zoo, which did not have the space to handle three hippos.

During a zoo fundraiser held by the San Francisco Zoological Society late last month, a donor bid on the naming rights to the hippo and named him after the Giants closer, zoo spokeswoman Lora LaMarca said.

He is the zoo’s first hippo since 46-year-old “Cuddles” was euthanized because of old age and arthritis in 2008.

Brian Wilson–the hippo version–will be given watermelon and other treats during special feedings at 11 a.m. and 2:30 p.m. on Saturday and Sunday.

The Giants pitcher, who spawned the phrase “Fear the beard,” will not be in attendance for the hippo’s celebration this weekend, but LaMarca said zoo officials are working on getting him to stop by this summer when they open a tarantula exhibit.

Some of the spiders are the colors of the Giants “and hairy like Brian Wilson,” she said.