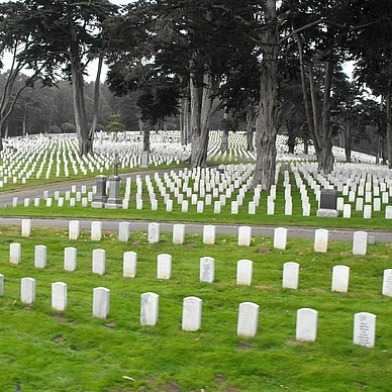 The 400,000 Americans killed during World War II will be honored at the Presidio’s 143rd Memorial Day ceremony at the San Francisco National Cemetery on Monday morning.

World War II veterans will lay a wreath to mark the nation’s entry into the war 70 years ago, event organizers said.

The tribute will also feature songs from a San Francisco barbershop quartet, a flyover by the U.S. Coast Guard, and will end with a 21-gun salute, organizers said.

Prior to the ceremony, the 191st Army Band will lead a parade from the Presidio’s Main Post, at the intersection of Montgomery Street and Sheridan Avenue, to the National Cemetery.

More than 3,100 World War II veterans are buried in the cemetery, whose graves serve as a reminder of the Presidio’s involvement in the war, organizers said.

After the Japanese attack on Pearl Harbor, the Presidio became the headquarters for the Western Defense Command responsible for retaking two key islands in the Aleutians from the Japanese, according to event organizers.

The Presidio was also home to a military intelligence Japanese language school. The Letterman Army Hospital in the Presidio, which was deactivated in 1995, treated many of the war’s major casualties.

“The Memorial Day ceremony is so important to the Presidio and its history of military service,” said Craig Middleton, executive director of the Presidio Trust.

The San Francisco National Cemetery is a National Historic Landmark and more than 35,000 veterans and their family members are buried there.

The parade will begin at 10:30 a.m. at the intersection of Montgomery Street and Sheridan Avenue. The ceremony, which will include an address from Mayor Ed Lee, is scheduled to start at 11 a.m. at the National Cemetery located at 1 Lincoln Blvd.