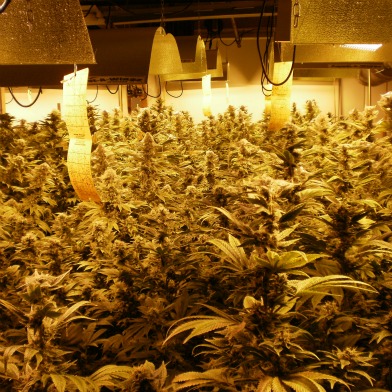 A nine-month undercover investigation by San Mateo County authorities culminated Monday in the arrest of eight people suspected of a variety of drug charges and the seizure of more than $450,000 worth of marijuana.

Authorities seized some 1,400 marijuana plants, which were in various stages of growth, as well as 55 lbs of harvested marijuana, six guns, and more than $47,000 in suspected drug profits.

According to the county’s Narcotics Task Force, nine search warrants were executed in the sting that squashed four indoor marijuana grow operations. The remaining locations were the residences of the suspects and alleged co-conspirators.

The arrests were the result of collaboration among the task force and police in San Francisco, Daly City and South San Francisco.

The operation was dubbed “Mighty Mites” after agents observed infestations of spider mites and their webs on a significant number of the plants and in the grow rooms.

All of the suspects are allegedly members of a close-knit Asian drug trafficking organization, authorities said, and are not associated with any known medical marijuana dispensaries.

Evidence suggests that the operations were strictly for-profit ventures, according to the task force.

The grow sites were located at three locations in Daly City and at one in South San Francisco. The remaining warrants were served at residences in four different San Francisco neighborhoods–including the Sunset and Forest Knolls–and at one Daly City residence.

As of Tuesday, agents were still actively gathering and analyzing evidence in the ongoing investigation, and those arrested were still in custody pending arraignment.

The suspects are scheduled to be arraigned on Wednesday at 1:30 p.m. at the San Mateo County Northern Superior Court.