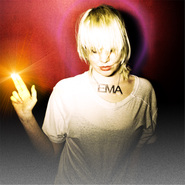 Having been greeted first by Past Life Martyred Saints‘ cover art (lone girl in a loose white t-shirt, head curtained in bleached blonde bangs, weight shifted with challenging swagger, fingers lifted in the shape of a gun, its barrel glowing bright – E.T. style – and her head haloed in a spectrum of reds and purples like a Starburst religious icon), I assumed, naturally, that EMA was about to churn out some seriously ecstasy-munching rave jams, and I was pretty excited about that. I was wrong.

My misjudgment became clear about one second into the album’s opener, “The Grey Ship.” It’s an indie-folksy beginning with hints of shoegaze – a breathy female vocalist (vocals doubled) and acoustic guitar (also doubled.) It wasn’t about to wind up on my next party mix, but the voice was arresting enough.

Then … about three minutes in an oozing synth arrives, full of bass to carry Anderson’s (EMA = Erika M. Anderson) chanting, and a few minutes later the song climaxes with some seriously unexpected guitar riffing and what sounds like traditional European violin work. The song apparently draws from epic Nordic folklore. EMA’s stop-you-in-your-tracks “about” description on her website would appear to be illuminating here:

Erika M. Anderson grew up in the dive bars and rotten graveyards of South Dakota. She is a direct descendent of Erik Blood-Axe, the ruthless Viking warrior. All the boys ask her why she is so tough. She is 6 feet tall. She loves the jukebox.

The album goes on to unleash an unsparing look inward, with EMA’s transplant from the prairie to Los Angeles at an early age standing as a central theme. Veering from thundering electronic noise and dead-pan vocal delivery to melodic acoustic arrangements and lyricism that remind me, eerily, of Elliot Smith, Past Life Martyred Saints is an uncommonly affecting album. In the end, the cover art’s alien/religious imagery and assertive independence will make sense – not in the rave queen way.

Listen to “The Grey Ship” here at the Souterrain Transmissions website.
Catch EMA at The Rickshaw Stop on June 4.