Herrera Stands By Tourk (For Now)

City Attorney: “I know what the law is” 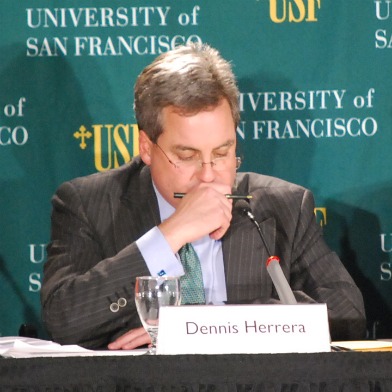 “They weren’t lobbying contacts at all,” Herrera told the Appeal following a nine-candidate mayoral forum at the University of San Francisco, describing the four meetings between Herrera and Tourk which Tourk registered as lobbyist contacts in filings with the city Ethics Commission.

Herrera did not offer an explanation as to why his consultant would list “casual conversations” as lobbying contacts, but maintained the benign nature of the encounters.

“The POA, it was a conversation about who I thought would be a good chief, that’s it,” Herrera said. “The others were informational conversations where [Tourk] told me about the [CPMC] project.”

Herrera has forwarded an ethics investigation into the lobbying contacts to the Oakland City Attorney, but reiterated that there was no wrongdoing, at least in regards to his contact with Tourk.

A lobbying “contact” “means communication, oral or written, including communication made through an agent, associate or employee, for the purpose of influencing local legislative or administrative action,” but there is also a host of “activities” which are specifically not contacts. Read it for yourself here.