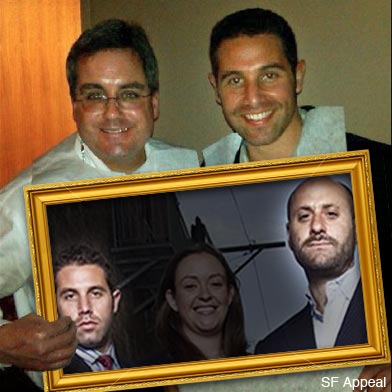 Maxwell Szabo, whom Tourk employed at Ground Floor Public Affairs during that firm’s involvement in the Recreation and Park Department’s efforts to find a new contractor for the Stow Lake Boathouse — the ethics of which are also under scrutiny — remains as field director for Herrera for Mayor, campaign spokeswoman Jill Nelson confirmed on Monday. Tourk was field director on former Mayor Gavin Newsom’s 2003 mayoral campaign.

It was at Ground Floor Public Affairs that Szabo sent e-mails to New Mexico-based Ortega Family Enterprises, who had hired Ground Floor on recommendation from a Recreation and Park Department staffer, which outlined strategies to win the Stow Lake contract from city officials.

Szabo started at the Herrera campaign on February 1, according to Nelson. The previous day, he had resigned from Ground Floor Public Affairs, though his picture and biography still appeared on the political consultancy’s web site as of publication of this piece.

Szabo, a former Congressional staffer and San Francisco native, according to the aforementioned bio, did not return emails or telephone messages seeking comment.

Tourk resigned from the campaigns of both Herrera and District Attorney George Gascón after it was reported that he had recorded lobbying contacts on behalf of special interests such as the Police Officers Association and California Pacific Medical Center with both city officials while also working for the officials’ political campaigns as a campaign consultant. Tourk resigned because he did not want to be “a distraction,” he said.

Another former Tourk employee was also involved with the Gascón campaign, though his involvement has ended, Nelson said.

But does a longtime former Tourk employee remaining on the campaign also present a distraction — or a continued potential conflict? Nelson would not answer that question on the record, but a local political consultant, speaking on background, opined that Tourk is still very much involved with both campaigns.

“Max Szabo is there [on the Herrera campaign] because of Alex Tourk. I don’t think he’s run a field campaign in his life,” the consultant said. “It’s not a clean break [for Tourk].”

Szabo appears to be continuing in that vein, Monday sending out an invitation to Herrera’s campaign kickoff event, from a “herreraformayor.com” email address.

While it makes a wonk question whether or not Tourk has actually severed his ties with the Herrera campaign, this kind of continued close relationship is neither illegal nor unethical, our consultant said, “mostly because it happens all the time.”