Doug Varone and Dancers is always a tour de force on stage. Varone’s dancers have been described as having “luxurious amplitude and free flow“, and his choreographic style is “grounded, muscular, expressionistic“. The company, 24 years young, returns to San Francisco this weekend with Varone’s new work “Chapters From a Broken Novel,” co-commissioned and presented by San Francisco Performances.

Last month, I caught up with Netta Yerushalmy, a dancer with Doug Varone and Dancers. Born in South Carolina, she began to dance as a toddler, and her family moved to Israel soon after. She continued her dance studies at Tisch School of the Arts, receiving a BFA in dance in 1996. Yerushalmy joined Doug Varone and Dancers in 2007, and she also continues to create her own dance works in both New York and Tel Aviv.

On break between the company’s Spring New York season and preparing to tour (with a visit to San Francisco), Yerushalmy found a nice, quiet corner in the New York Public Library to chat with me, and she illuminated what the life of a modern dancer is really like and what she thinks about dancing for Varone.

Becca Klarin: Thanks for taking a few minutes to chat with me, and telling me a little about how your experience getting into dance and started dancing for Doug Varone!

I saw on your website the video of you when you were about three years old (dancing)–absolutely adorable! How’d you get into dance and what about it kept you there?

I can’t say how I got into it because, as you can see, I’ve just been doing it–that was when I was three and I’ve literally been doing it non-stop since then. I’m one of those people who just always did it, and I don’t remember one moment in my life. I think it’s kind of rare, but I don’t remember one moment where I questioned if this was this a legitimate pursuit or if I wanted it. I’ll constantly go see dance, and as obscure and sometimes not communicative as it might be or successful, I’m like “Wow, I love this art form.” It speaks to me. It’s kind of a simple answer.

What: Doug Varone and Dancers, presented by San Francisco Performances

Where: The Novellus Theater at Yerba Buena Center for the Arts, 700 Howard Street

Sometimes the simplest answer is the most honest.

It is. It’s something I’ve thought about. I do many other things in my life. I’m a big art lover and food lover and a traveler and all that. A lot of people say “I want to go back to school, I want to do all these other things.” I’ve never had that, in terms of abandoning dance.

What do you enjoy most about dancing professionally? And also re: choreography?

Well, they’re totally different. They almost don’t relate to each other. Dancing professionally is wonderful because I get to dance every day. That’s what I do for a living. With Doug we get to share what we do with a lot of people who respond very readily to his work. That’s just gratifying in a unique way. We perform a lot. Just being able to do my art, when you do it professionally, you just get to do it a lot. 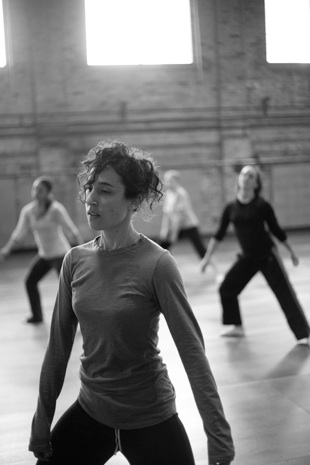 Of course, there’s people who work professionally but for more fringe-y artists or smaller companies and they’ll get to do their art but maybe not as often or on a regular basis. And… you know, there’s a level of confidence and maturity, how to approach your body and take care of it, and how to approach performing and nervousness or the preparation of performance. It’s nice, getting to work professionally, you get to work through a lot of that: the nervousness, the different aspects of taking care of one’s body. You kind of learn the skill even more.

What do you enjoy the most about dancing for Doug?

Dancing for Doug! OK. Well, working for him is wonderful. On a personal level, I came into the company in a moment in time when the group had a really wonderful chemistry… He’s a great man, and he’s very respectful of me pursuing my own work… In terms of the working environment, there isn’t a sense of hierarchy or a sense of having to let go of things that are important to you. He encourages us all to have our own lives and pursue what’s important to us.

Dancing for him on a physical level, it’s increidbly physical and organic. It’s taxing on the lungs! There’s a very basic, animalistic thrill. It’s not work that’s cerebral. You’re not standing there working with content that you analyze. There’s predominately an intuitiveness to a lot of what he does in creating the composition, and what we do with our bodies. The basic thing of his work is that he wants people to be people on stage. So you’re dancing for him, you’re not putting on some postural sense that you might see him or someone else doing. He hires us to be who we are and to interpret his movement and his choices, and to add to his choices from our perspective.

For the company dancers, I think I saw most of you here in San Francisco last time.

Is that typical of most companies? I even remember having Eddie Taketa (a company member) as a teacher back in college, and he was with the company even then.

I would say that Eddie is an anomaly, with him being able to still dance at his age. But definitely Doug has mentioned it many times that people tend to stay with him a long time… In the history of the company, there are a lot of people who have been in the company for ten years.

I think it says a lot that dancers continue to stay and work with Doug for that long.

On tour, what’s a typical day like for you?

Well, it really depends which day on the tour we’re talking about. If it’s the day we arrive, then we just check-in. If it’s following that,–it depends how long we’re in a city–we’ll either do a few master classes, which means only two or three of us teach, and then the rest of us have the day off. Or we could do six or seven master classes followed by a community performance, like an open rehearsal, in the evening. Or we could be doing none of those outreach things, the day after we arrive, we have a spacing, like a beginning tech rehearsal, and then the following day, we have the dress (rehearsal) and the show.

For me, the day of travel is a nice time to walk around and see where the coffee shops are, if there’s anything interesting to explore in the city. The following morning, I usually like to do something: find a river, a park, a museum. By the evening, it’s more prep work for the show.

Touring is very different for everyone. I’m one of the people who is very restless, I have ants in my pants! I always try to find something to do, something out in nature. Some people are very the opposite. They just want to get out of their New York City hectic lives or maybe they have kids and families. It’s an opportunity for them to sit and read and catch up on email. Some people don’t even leave the hotel.

[Somehow we segued into the work the company is presenting. My recorder seemed to take a little break around there…]

“Chapters From a Broken Novel” is really accessible, but in a good way. He’s struggled with how to give people information but not give them too much, and I think the end result that he’s arrived at is very successful. A lot of people that I know came that who don’t see dance, and were able to connect.

I find that these days, so many people are attached to Twitter and Facebook. It’s like now, now, now, what can i access immediately! And I want people to go and just sit somewhere for a few hours, not distracted, pay attention, and indiscriminately just take it all in.

The piece has 20 sections, and there’s a way how it almost answers to that short attention span that we’re cultivating now with these advances, if you want to call them advances, in technology.

I hope we weren’t too loud in the library!

Naw. I got some dirty looks, but that’s about it.