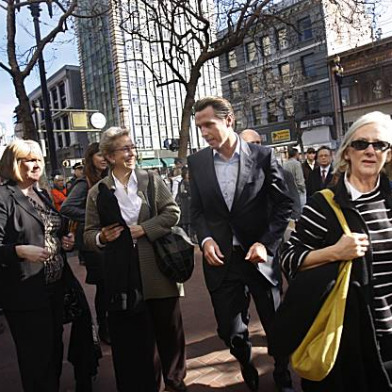 Community leaders from San Francisco’s Mid-Market neighborhood today argued that the city’s public art projects are more than just “lipstick on a pig” and are helping to revitalize the chronically blighted area.

Attendees at a San Francisco Planning and Urban Research Association event questioned whether the projects, one of which will unveil new work next week, are really just a way to cover up the neighborhood’s crime, drug use and homelessness.

But neighborhood activists and property owners said they agree with city officials that the public art installations can lead to tangible, long-term benefits in the community.

Stanley Herzstein owns 1019 Market St. and has let one of the commissioned artists project images on the side of his building since the installations went up on Dec. 9. The piece is set to be taken down in early June.

“It was a great project,” he said. “It added to the neighborhood, and we’re very happy with it.”

Herzstein said he has signed several new tenants since the project began and is confident the artwork has real-world, bottom-line benefits for the community.

“This is seed money,” he said of the arts funding. “The property owners have to make the major improvements, which we’ll do if we think we can get a return on our investment.”

He and other speakers reiterated that the arts projects needed to be part of a cumulative effort to improve the Mid-Market neighborhood.

John Peterson, founder and president of Public Architecture, said he too believed the public art programs are valuable pieces of a larger strategy for generating optimism and interest in the neighborhood.

“The concept is not new,” he said. “Art has been used to shift momentum in urban environments. It increases foot traffic. It drives retail opportunities.”

He added that part of the goal was to change the public’s perspective and make people want to be in the Mid-Market area instead of feeling threatened west of Fifth Street.

A representative of the Central Market Community Benefits District who declined to give his name also said the art projects have had a “profound effect” on the neighborhood.
“Art has an amazing effect on communities that need healing,” he said.

On May 13, 11 new pieces will be unveiled as part of the yearlong Art in Storefronts program. The project aims to spruce up empty retail spaces and was paid for with a $250,000 grant from the National Endowment for the Arts.