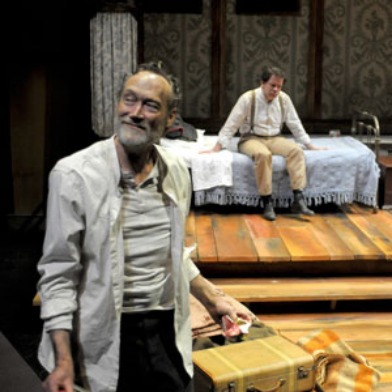 The force in Anton Chekhov’s Three Sisters (and, wow, there is force) may very well, as this production’s translator Sarah Ruhl points out in her introductory remarks, come down to two Russian phrases that simply have no equivalents in English. One is v’syo ravno – here translated as “it’s all the same,” usually uttered with regard to life in general in a tone of resignation or, perhaps better, acceptance (of course, Dostoyevsky’s protagonists have been known to attempt suicide on account of v’syo ravno, if that helps put it in perspective). The other is poshlost’, what might be approximated by “petty evil or self-satisfied vulgarity” (Ruhl sticks to “vulgarity.”) Think George Costanza, maybe?

Indeed, while the costumery and set design (both very good – the work of Ilona Somogyi and Annie Smart, respectively) match 19th century Russia, the production succeeds in taking on an American, at times even contemporary quality with natural ease. I could well imagine these provincial intellectuals as barstool philosophers below the Mason Dixon line, or transport their tragically hilarious relationships onto the set of Arrested Development.

It is a story of three sisters, born of a military family with intellectual aspirations, longing to escape their provincial town and its hopeless banality to go to Moscow (the big city!) Spoiler alert: they don’t. Instead, we have the pleasure of watching many little moments and large emotions pass over the course of a few years, during which brother Andrei, once thought destined for tenure at a Muscovite University and thus the sisters’ ticket to freedom, falls for a beautiful, but cruel and borderline insane wife (played by Emily Kitchens in a delightful, when not totally overblown performance) and settles into the only position of esteem within easy reach: a seat on the local town council.

In a Cohen brothers-esque feat (think Fargo, A Serious Man,) the pathetic turns and defeat constituting these characters’ existence produces a steady stream of laugh-out-loud hilarity – no doubt Obie Award-winning Director Les Waters’ success above all. Invite enough sarcastic, high-philosophizing, self-pitying Russians to a vodka-fueled birthday party, though, and you’ve got a pretty sure-fire recipe for humor.

And, of course, doses of levity are always appreciated in plays of this length – three hours, with a fifteen minute intermission during which it is suggested you refuel with artisan cupcakes and Russian (i.e. vodka containing … or containing only vodka) inspired cocktails.

See Three Sisters at the Berkeley Rep for the v’syo ravno, for the poshlost’, and to remind yourself of the special hold that theater, done well, can take on you – something that fleeting images projected onto a silver screen cannot quite reproduce.

Indeed, too little “happens” in Three Sisters for it, or any of Chekhov’s work, to be viable for screen adaptation. Yet, so much is felt. Emotions and the present-tense recognition of them constitute the events of this play, and the Berkeley Rep’s intimate Thrust Stage, graced by this playwright/director team, makes a brilliant house for them.

Three Sisters runs until May 22 at Berkeley Rep.