SF Ballet Gets Gutsy And Raw In McGregor’s “Chroma”

Wayne McGregor‘s “Chroma,” making its San Francisco Ballet debut on this season’s Program 6, is a thing of pure power and guts, filled with odd, eye-catching shapes and quirks, and it’s as obvious as day that San Francisco Ballet deserves more exciting opportunities like this to show its mettle. “Chroma” spans about a half hour, and in that short amount of time, McGregor creates a fantastical whitewashed world filled with sensual, raw imagery.

The dancers dabble with extremes, from extensions to balances and speed. The ballet lexicon is the foundation, but not the ceiling here. There’s no assumption of what comes next–it’s all a guessing game, with intent being the wild card. Dancers pair up in groups of twos, threes, and beyond, and boom! They’re off like supersonic rockets as the orchestra tears through the percussive score with music by Joby Talbot and Jack White (yes, that Jack White).

Dana Genshaft and Anthony Spaulding made a spectacular pairing Thursday night with their long limbs melting into each other as they went on the offensive. And Pascal Molat, Garen Scribner, and Isaac Hernández showed spectacular timing and attention to detail as they moved through their trio section. I especially enjoyed these three together–it was refreshing to see three strong male bodies dance together in a way that’s not traditional, princely, and well, expected, at least in ballet.

And that, I think, gets to the heart of “Chroma”–McGregor pushes male and female into the background and focuses on the heart, the soul, and the quick beats that pepper and shape our lives in an ever-twisting, free-form fashion. And it’s those connections that fuel our very essence. 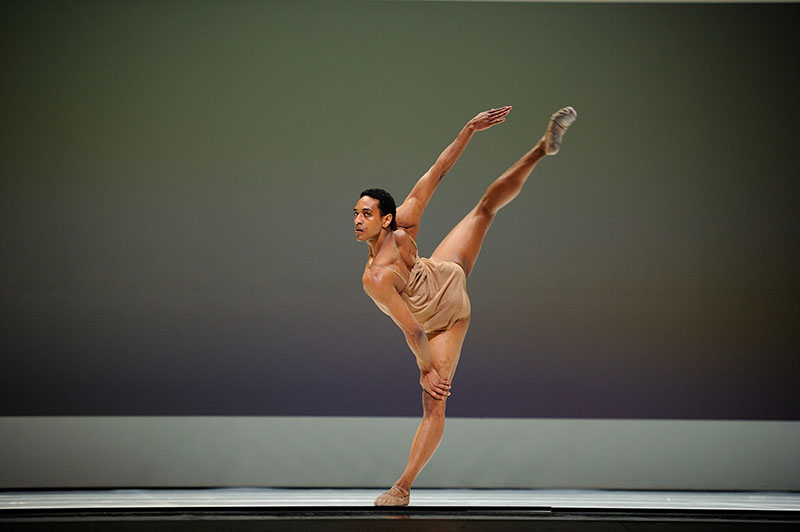 Program 6 includes two other pieces. The first is an encore of Christopher Wheeldon’s “Ghosts,” which looks better upon a second viewing, but still disjointed. The soloists and corps create illusions of sweeping upper bodies and undulating torsos, leading us to a high crescendo followed by one universal gasp into a blackout. But then the leads revert to static movements curtailed by tight shoulders and exacting positions. Courtney Elizabeth, one of the soloists, blew everyone out of the water here–she’s on a roll this season, and it’s great to see her shine so brightly.

The third piece, Helgi Tomasson’s “7 for Eight” offers up a polite bit of dances to compositions by Bach.

But the big draw is rightfully “Chroma.” Wheeldon himself predicted that SF Ballet would “rock in ‘Chroma'”, and he was spot on. Be ready for this tour de force to rock your world.

Program 6 alternates with Program 7 through April 20.