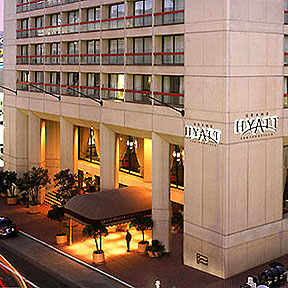 In the Bay Area today, Passover represents more than just reflection on the Jews’ departure from Egypt; it’s also a time for protest.

Groups of hotel workers held demonstrations and Passover services in the streets in front of Hyatt hotels in San Francisco and Santa Clara to protest workplace injuries and to draw attention to an ongoing contract dispute.

“If you’re cleaning too many rooms every day with these 200-pound carts, you have no room for rest,” said the Rev. Rebecca Kuiken, director of the Interfaith Council for Economics and Justice in Santa Clara County.

Kuiken said that in recent years, about half of the housekeepers at the Santa Clara Hyatt, located at 5101 Great America Parkway, reported experiencing work-related pain.

She said that of the maids surveyed at that hotel in 2008, 69 percent reported back pain; 67 percent had problems with their wrists, hands, and fingers; and 56 percent experienced trouble with their knees, legs, and feet.

“The hotel industry does not have simple tools for cleaning bathrooms,” Kuiken said.

“It’s the equivalent to farm workers using a short hoe. The workers went through backbreaking labor because the tools were too short,” she said.

She said that like farm workers, maids don’t have long-handled tools to clean showers or bathtubs.

“We’re also having religious services,” Kuiken said. “We want to talk about what we should be mourning and share stories about where we found hope.”

The Hyatt workers’ labor contract expired in 2009 and negotiations for a new contract are still under way.

Hyatt spokesman Peter Hillan said Hyatt management made an offer to settle the dispute on Feb. 25.

“Their only response has been to continue to put together these street theater protests and not negotiate at the table,” Hillan said.

He didn’t comment on the details of the offer made by hotel management.

“It was an inappropriate contract,” said the Rev. Donna Wood, who attended today’s San Francisco protest.

Negotiations have been ongoing between Hyatt management and Unite Here Local 2, which represents workers at 61 hotels in San Francisco and more across the country, union spokeswoman Riddhi Mehta said.

“Hyatt’s Feb. 25 contract was trying to take back affordable health care for working families, pension, and wages,” she said.

Demonstrators presented an award to Hilton management today for being the first hotel to settle with the union in March. Since then, settlements have been reached with Starwood, St. Francis and W hotels in San Francisco, Mehta said.