Dandelion Dancetheater, led by Eric Kupers, investigates friendship through dance, music, and theater, and pays tribute to a recently deceased friend in the aptly titled “Friend”.

This week, I conversed with Marling about his new work. We’ve never met–well, I take that back. I’ve seen him perform several times. This curly haired man dances with an organic ease, and he swoops through space with contemplative intent.

I last saw him perform earlier this year in “A Hand in Desire“, and toward the end, there was an interactive moment where the performers each picked someone from the audience to quietly answer a personal question.

I think it was something along the lines of “Who did you once have a crush on who did not reciprocate your feelings?” I haven’t dated in over 14 years, so this was a tough one. Finally, with my husband chuckling, I stammered and finally, meekly spit out “Tom Cruise” to Marling (really, I just couldn’t think of anyone else! How sad), who, with a twinkle in his eye, thanked me. The artists returned to the stage, each yelling his or her respective monikers, with Marling shouting “Tom!” at the top of his lungs. For one small second, I felt vindicated. And then extremely thankful that I’m not Katie Holmes.

But putting crazy teenage fantasies aside, I chatted with Marling over email about dance, queer communities, and identity.

Becca Klarin: Tell me a little about your dance background.

Kegan Marling: I was first pulled into dance accidentally when I was in 2nd grade – my mom needed something for me to do after school while she worked and the only two school programs at the time were “jumping and turning for dance” and football. Being a scrawny nerd… I knew football wouldn’t turn out well. I found out that I loved the athleticism and community of dance, which thankfully came without the aggression you find in most team sports.

I trained with the San Jose/Cleveland Ballet and Oakland Ballet for about 5 years, and then quit dancing in high school (I was too embarrassed!). I didn’t really start dancing again until a year or two into college. I was lucky–UC Davis had a very tiny arts program at the time, yet the faculty had some deep connections in the dance community so I was able to work with artists like Marlies Yearby, Bill T. Jones, Joe Goode, Lea Anderson and Della Davidson.

I was also struggling with finding a voice in contemporary modern dance, so I was taking classes in West African, Balinese, ballroom, contact improvisation and whatever else I could get my hands on. I wasn’t necessarily trying to learn those forms to emulate them, but I wanted to understand how dance was being integrated into community, how different cultures, communities and teachers approach movement. It was exciting and terribly humbling. 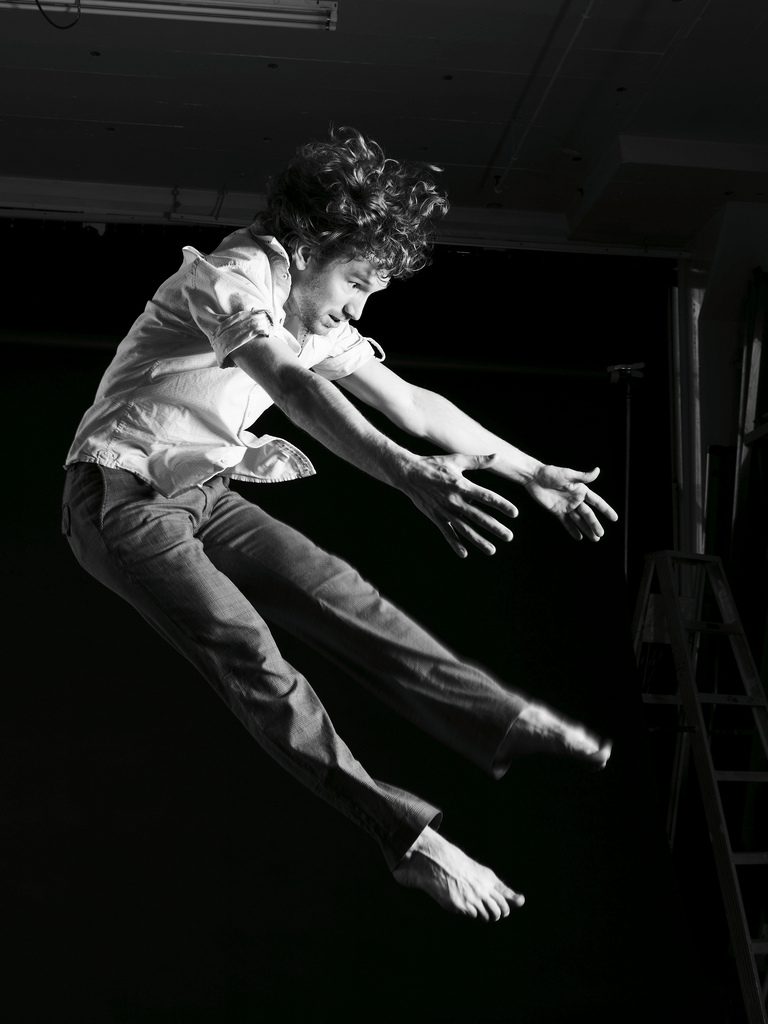 “Jump ship mid way” centers around aging as a gay man and how you mark the passage of time. What about this topic motivated you to tackle it head on?

I’ve never felt I fit in with what I believed was THE gay community, a culture that seemed to be marked by an ease and openness around sex that I did not possess. Over the past few years, I’ve begun to explore multiple queer communities and identities, and it seemed important to understand what led me to thinking of the gay community as this singular identity in the first place.

I definitely recognized part of it as a form of internal homophobia, but I felt that there was something else missing. The next thing I know, I’m starting to dig up articles on rites of passage for men–how different cultures help men transition from “boys” to adults. And then I came across an article by Jonathan Rauch, which touched on traditional rites of passage for men in America–marriage, having a child, joining the military–and the lack of access gay men have to these rites.

I started talking to peers about their experience of what it means to be a gay adult and found that most didn’t identify themselves as “adult,” despite being of an age that is traditionally associated with maturity and adulthood. This traditional understanding of “adulthood” seems to be a choice we make, and a choice that not many gay men are making. Is it a resistance to “normalizing” our sexuality? A desire to remain eternally youthful? Or the lack of gay role models to offer alternatives? I felt this was worth exploring.

Do you think the lack of life milestones is prevalent in the lesbian community, too?

Yes, I would guess that a lack of milestones is also present in the lesbian community. But I have to say I honestly didn’t look into that perspective. I knew from the beginning of this project that I wanted to focus on just a few stories, particularly those of gay men in their 30’s. To try to create a work that would touch on the lives of lesbians would have been too broad at this time.

I will say that one of the really interesting things that kept coming up in my research and explorations was that everyone seems to be lacking support in life transitions. Women aren’t often provided the mentoring to really navigate the growth in choices that have come out of the past century. And it’s not just gay men that are embracing youth and foregoing adulthood, but men in general. It’s something I plan to dig deeper into as this piece develops in the future.

Are you tackling any life changes or growing up, as Rauch would put it?

Me personally? Yes–I guess on some level I’m actually discovering some of my youthfulness through the process of creating this work. I’m working with three truly thoughtful artists (Mica Sigourney, James Graham, and Nol Simonse) who all have somewhat different trajectories in how they’ve navigated growing up in the queer community, and how they experience youth. Hearing their stories has triggered some changes in my assumptions and my own relationship with youth.

I’ve always felt a tension between the family-oriented grown-up part of me and this coy inner-child navigating an overtly sexual community. I don’t know if it’s “growing up,” but I’m finding that while those sides are still very present, the tension between them seems to have faded quite a bit. And that feels like a step in the right direction.

Identity, personal growth, and self-awareness are such vast topics. Was there anything in particular that helped you shape “Jump ship mid way” into its final form?

A couple of things really helped “Jump ship” take shape. First, there’s this evocative novel by K.M. Soehnlein, “You Can Say You Knew Me When”, which prompted me to look at these issues of identity construction and how we make choices through the filter of an historical role model. For the show, it’s Freddie Mercury. He becomes our starting point.

And then I’ve always been interested in storytelling. From the start I’ve had an image of people sitting around a fire–with someone in the center re-enacting an old tale–and I wanted to get at that feeling. So I’ve been playing with how to bring the audience into that experience, and how our stories can help us navigate an otherwise vast and unwieldy topic.

In addition to performing the work at CounterPULSE, do you have other plans for this piece? Or thoughts on exploring its central themes further?

My residency at CounterPULSE has been tremendously helpful as a research period, and from the start I’ve know that this work was a foundation, a prologue of sorts. I started off meaning to make something about adults, and in the process found out that I first needed to make something about role models. So there’s a lot more to be said, and I’m excited to delve deeper into this material.

You can read more about both artists in residence at their CounterPULSE artist pages. The blog entries include honest and thoughtful snippets into each artist’s process:
Kegan Marling
Eric Kupers/Dandelion Dancetheater