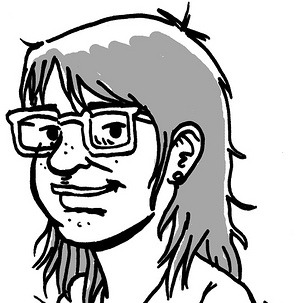 Ever looked at a comic book and thought “I wanna do that!” Well, here’s your chance to make it happen — Appeal editorial cartoonist Susie Cagle will at the Museum of Craft and Folk Art this Thursday, to teach a primer in mini-comic book making.

It’s part of MOCFA’s “Craft Bar” series, named thusly ’cause they teach you how to make things (craft!) and there is beer (bar!). Get it?

At Thursday’s event, Jeeyon Shim will teach you how to make a felt bracelet, and Susie will take you “from script to bound book” in a class where you’ll “write, draw, and assemble your own finished pocket-sized comic in about an hour.”

Susie tells the Appeal that by teaching the class, she’s “hoping to demystify the whole comics thing a bit — I’m actually making a special little how-to mini comic that people can have for free, that has tips and resources in it.”

If that’s not enticing enough, she says that she’ll “be drawing there, working on my next comic, so that is cool? Also $1 beers! And my books for sale will be extra cheap!”