Keeping A Goat (Or Two) In SF: You Can Do It, Would You Want To? 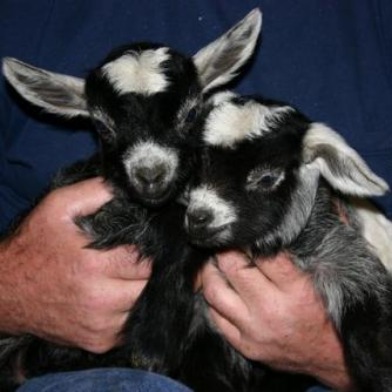 You read the internet, so you know that there are goats being deployed all over SF, mainly for “weed-whacking purposes”. And if you’re a goat-milk drinker, you know they’re good for more than just the lawn — goat dairy is great for the lactose intolerant (Redwood Hill Farm brand is an Appeal fave). But neither goat lawn services nor the fruit of their udder comes especially cheap, so maybe it makes more sense for one to just get (and keep) one’s own goat. According to an article in today’s NYT, it’s totally legal for a San Franciscan to keep not just one, but TWO goats. What are we waiting for? Is goatkeeping poised to be the next big backyard trend, replacing chicken keeping?

The Chron reported on the “trend” way back in 2008, noting that San Franciscans are actually “allowed three of one kind of animal and a total of four animals,” so I guess since I already have a dog and a cat, that means I can only get one goat. I’ll have to get a permit for my goat from the Department of Public Health, because that’s required for the keeping of animals with hooves. I can do this!

According to the Chron, I can’t sell my new goat’s milk or cheese, which is fine, I can eat it myself! And my new goat’s pen has to be, health codes say, 20 feet from all doors and windows of my building. If we put it at the very back of my yard, I might be OK? Maybe?

But then there’s the destruction. According to today’s Times, Excelsior resident and year-long goat guardian Heidi Kooy says her “goats mangled her white tiger nectarine tree, gnawed her redwood fence posts, gorged on her grapevines, swallowed her Victorian tea roses like candy and tore off the waterproofing mat under the siding on her house.”

On the plus side, I have none of those things in my yard (do not get me started on my building’s siding. Do goats like asbestos?). On the minus, this seems like a fast way to lose my deposit.

And there’s more tough news: Kooy says “one of the goats spent several weeks covering (her) with bruises and scratches whenever she approached its udder.”

Wait, goats don’t want me grabbing their boobs? Don’t they get that I’m trying, in Kooy’s words, to “relax our cultural walls that relegate agriculture to the country”?

OK, so maybe it’s not a great idea for me — but if you’re undeterred, animal adoption site Petfinder.com has a great section of “barnyard” animals you could bring home (or to Benders!), including several goats in our (at publication time) area.

As for me, I think I’ll stick with City Grazing and the SF’s zoo’s children’s area for all my goat needs. But if you get one, I want to come over, OK?

Photo: just two goats you could adopt from Petfinder.com