Dave Chappelle: If You’re Googling This, Please Don’t Be Mad

(I did tape the show but I threw it away) 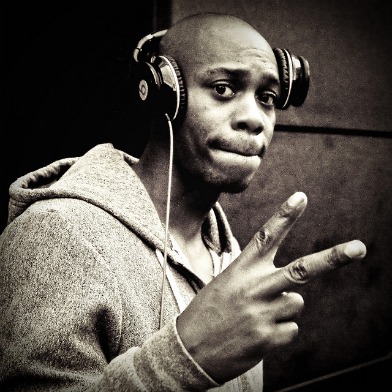 Wednesday night and tonight, Dave Chappelle will go onstage at Cobb’s to tell some jokes. He’ll also, if you can stop yelling about Lady Gaga, Justin Bieber, Twitter and the routines Dave got tired of doing 10 years ago long enough to watch and listen, let you take a peek at him. Through him. Into him. Dave Chappelle is vulnerable, not exactly happy and a little scared, and he’s not afraid to show it.

“Being famous,” he said to a packed house, all of whom could — and did — recite his Chappelle’s Show routines to the word, “sucks my balls.” It’s being famous that allowed a comedian to announce and sell out three nights of shows in an impromptu fashion, with no advertising other than the online media grist mill, which Dave doesn’t like too much either. “This is going to be brutal on Yelp tomorrow,” he said. “Fuck it — I’m going to Yelp myself.”

It’s also being famous that led Chappelle to be onstage for almost five hours, at the end placidly smoking a corn cob pipe, wondering why people were still listening to him talk at 2 a.m., yet riffing off of whatever pop culture tidbits were thrown his way regardless.

“I could do this all night,” he warned. Someone asked him about Lil’ Wayne, and Dave Chappelle dutifully provided the impression he’d already done a few times that night, a sort of chopped-and-screwed Leprechaun addicted to codeine. It’s goofy and it’s funny and it works because at least nobody has to think. Then Dave goes too far: the Lil Wayne is the same voice he uses with his son at home, Dave said. “Tell us about your family!” someone yelled. “And the nominee for creepiest question of the night goes to…” Dave responded.

In between jokes and during puffs on his pipe, the club would fall silent, the crowd waiting for Dave to say something, Dave waiting for the crowd to do something. Like leave. Or shout out something other than lines from Half-Baked. To the inevitable, “I want to talk to Samson!” Dave responds. “No, you do not.”

Dave puffs on his pipe. The whirring from Cobb’s ventilation system is all you can hear. “There’s an old adage in show business,” Dave Chappelle said. “If you can hear the air conditioning, things are not going well.”

Yet it sounds like Dave picked this time and place for this show. He comes to San Francisco often. You end up asking yourself why.

“San Francisco is what pushed me over the edge,” he said. “It’s where I went crazy.” Maybe not a surprise, judging by the crowd, who when not shouting out pop culture questions, mentions the fact that rapper Kool Herc is in the hospital and can’t pay his medical bills. This is what we want to hear when we’re out to have our spirits lifted? “San Francisco is a town where everyone wants to talk about bad news,” Dave Chappelle says.

Not that the show is all heavy dark night of the soul stuff. Dave’s too buoyant for that. He gets a gaggle of audience members — one of whom is a dead-ringer for Michael Moore, further intensifying Dave’s feeling that this is all an act — to film a movie for him, the punchline of which is “I kicked her in the pussy!”

Dave also has an opinion on Angry Birds. “Angry birds,” he says, “is about Palestine. I’m convinced of it.”

“I’m bombing,” he says later, even as an almost-obsessed crowd hangs on every word. “This is going to be a hard show to celebrate… this booby-trapped ass show.”

This is because you get the impression Dave Chappelle doesn’t want to celebrate shows. When he talks about the bad old days — the much-publicized departure from Comedy Central, the trip to Africa, rumors of breakdowns — the audience eats it up. And that’s more than a little weird.

Why did a crowd of people shell out $70 a pop to listen to — probably — still the most famous comedian in America talk about his personal meltdowns? “How do I know this isn’t all rigged?” he asks at one point, an exaggerated paranoia that’s too heartfelt to be an act.

You get the impression that as funny as he is, Dave Chappelle doesn’t want to be on stage anymore, in front of the same people who — after years of screaming, “I’m Rick James, bitch!” while out with his kids — really are the root cause of all his problems. He wouldn’t have had to walk away from a $50 million deal just to salvage his life if fame wasn’t so oppressive.

Now, at 37, with 25 years in show business behind him, you get the idea that Dave Chappelle isn’t really sure what to do anymore. Telling jokes onstage is all he knows. And it broke him. People know this. They know it full well. Yet these same people will pay money to sit until after last call to listen and watch him do anything. And that’s weird.

“I know too much,” Dave says — and that’s the problem. He’s too smart for this. He can’t turn his brain off long enough to not be disturbed by it all. “I know what’s made from the hot dogs of life.”

So what now? The people left in their seats desperately want to hang out with Dave, who would rather be anywhere else in the world than with a pack of fawning hangers-on.

Coffee at Mel’s Diner, someone asks? “Nah,” Dave says, as he puts on his backpack (with camera, David Sedaris book, Winstons and pipe tobacco. The iPod with Lil Wayne is back in the dressing room). “I’m all coffeed out.”

“I’m going to be up for a while,” he says to the die-hards in their seats as the Cobb’s staff — all of whom have to be there tonight, too — finally coughs him off the stage.

Photo of Dave Chappelle taken on Market Street in 2010, by Travis Jensen