Court: Levi’s Can Sue Abercrombie & Fitch For Back Pocket Confusion 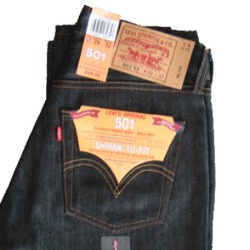 A federal appeals court ruled in San Francisco today that Levi Strauss is entitled to a second try on its claim that Abercrombie & Fitch weakened the value of the trademark arch pattern on the back pocket of Levi’s blue jeans.

San Francisco-based Levi Strauss & Co. claimed in a federal lawsuit filed in 2007 that Abercrombie & Fitch Trading Co. diluted its trademark by adopting a similar pattern on its own blue jeans.

White had said Levi Strauss would have to prove that the two designs were identical or nearly identical, and said the company had not met that standard.

But a three-judge panel of the appeals court said the correct standard under a 2006 federal law, known as Trademark Dilution Revision Act, should be whether the two designs are similar and have the result of blurring the distinction between the two brands.

The decision allows Levi Strauss to go back to the district court for a second trial or other proceedings on its bid for an injunction against the rival company.

Levi Strauss’ trademarked design, used since 1873, has two connecting arches stitched onto the back pocket of its jeans.

The appeals court said sales of garments with this design have accounted for 95 percent of Levi Strauss’ revenue over the past 30 years, totaling roughly $50 billion in sales.

Abercrombie’s design, which it began using in 2006, has two shallower arches connected by a so-called “dipsy doodle,” resembling the mathematical sign for infinity.

Abercrombie has argued in court filings that the two designs are not only not identical but are also not even legally similar. But the appeals court said that question should go back to the district court.