As Contagion Departs, Hemingway & Gellhorn Moves In: How To Stalk Clive Owen, We Mean, Get Cast 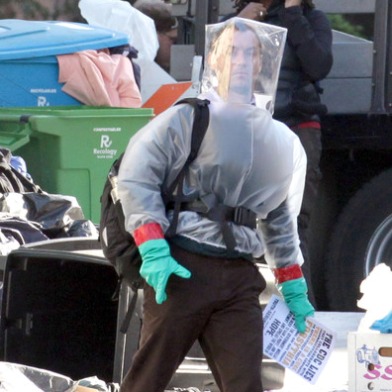 Is it an embarrassment of movie star riches? After a long stretch of Hollywood disses (not that we still aren’t getting dissed, Human Target, I’m looking at you), it seems like the waves of stars just keep breaking in SF.

Reportedly playing a blogger (shut up, there are lots of good looking bloggers! Have you seen Beth, or Andrew Dudley, or, actually, I can’t think of an unattractive local blogger!) with, SFist says “an unfortunate interest in conspiracy theories” (is there any other kind?), star Jude Law’s been spotted at the Four Seasons, the MOMA, and Spruce, as well as on debris strewn-streets that seem straight out of bluoz or Old Dirty Alley. Just think the money the production could have saved on set dressing if they’d just shot in SOMA instead of Potrero Hill!

According to CBS5, The production, scheduled to begin on February 28, is already seeking folks to play extras in the film.

Specifically, says Beau Bonneau Casting, “Spaniards & Spanish-looking Men and Women” to play extras for scenes shot in Oakland, for which you will be paid the princely sum of $8/hr. All the details are here, if you’re interested.