SF Zoo Gets New Baby Giant Anteater, Which Is Crazy Cute But Could One Day Kick Your Ass 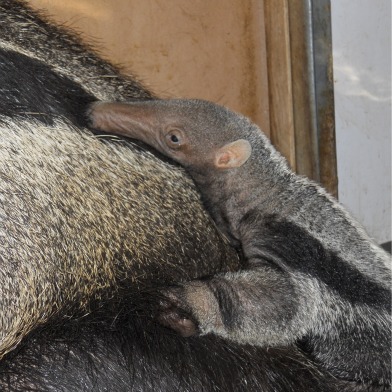 Oh my god, just look at this picture of the SF Zoo’s new baby giant anteater. Look at that paw! That nose! I AM DYING OVER HERE.

According to a release sent by the zoo to media, the baby, the first giant anteater birth they’ve has in a decade, was born December 22. The baby has yet to be named, perhaps in part because its gender is as yet, unknown (insert San Francisco values joke here).

According to the zoo, the baby will spend the next year riding around on its mother’s back. At some point in that year, you’ll be able to see him or her — but the baby’s not available for public viewing just yet.

When he or she reaches maturity (usually by age 4) he or she’s expected to get as big as 8 feet long, not including a long bushy tail.

The Giant Anteater (Myrmecophaga tridactyla)’s natural habitat are the “grassland savannas, swamps, humid forests, and woodlands” South or Central America. Though toothless all their lives, they manage to slurp down about 35,000 ants and termites every day, using their long tongues.*

According to National Geographic, when threatened the Giant Anteater can respond quite aggressively, rearing up on its hind legs while it balances using that tail, then lashing out with four inch long claws. They’ve been known, NG says, to even fight off dangerous predators like pumas or jaguars.