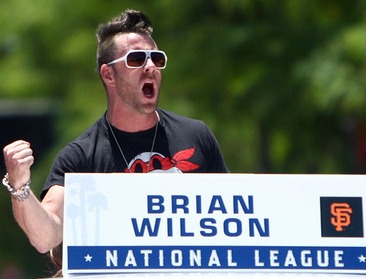 Yes, we all love the Giants, but do we love them enough to steal a show about them off the internet subscribe to Showtime?

If Entertainment Weekly is right, that’s what it might come to: they’re reporting that Showtime is in early talks with director/producer Mike Tollin (oh, goody, he was responsible for several inspirational sports movies including Radio, that movie where Cuba Gooding Jr. wore the goofy teeth. Rad) to do a “docuseries” that focuses on the San Francisco Giants.

Not only did Tollin detail the triumphs of a fictional brave, black, developmentally disabled guy, in 2006 he created Bonds on Bonds, a controversial reality series starring the proud asterisk. After Barry reportedly demanded more control of the show, ESPN canceled the show after 10 episodes. Perhaps this preexisting relationship with the team might make Tollin the right guy for the job?

Which were my thoughts, exactly — it seems the charismatic pitcher runs the risk of shark jumping with too much exposure (as would anyone! Brian, we at the Appeal are cool with you.)

NBC blogger Rick Chandler counters that thinking, saying “Tollin probably has the good sense to realize that a little Brian Wilson goes a long way, so few worries on that front.”

Which I would like to believe, but, again, THIS IS THE GUY WHO DIRECTED RADIO. In any case, Brock’s planning on liveblogging it, which will be fun for the whole family.

Update 3:40 PM: the SF Biz Times appears to confirm the deal, quoting Giants COO Larry Baer as saying “The Giants are delighted to work with Showtime and Major League Baseball Productions on this exciting new project…This series will break new ground and will enable our team to forge an even closer connection with our fans and the public at large.”

The show will, they report, be previewed the opening week of the 2011 season, and will run during the second half of the Giants’ season.

The series “will give viewers a front-row seat into the lives of the players, coaches and team personnel as they begin the arduous task of defending their World Series title,” a statement said.

The show is currently in production, and a name is still in the works.

It will premiere with a preview episode around the time of the 2011 season opener, and will continue with regular episodes during the second half of the season.