Ask The Straight Guy: Friendships With Women, How Orientation’s Like Doritos 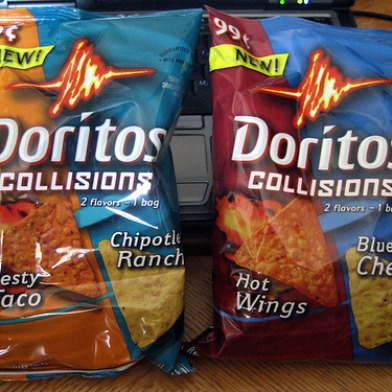 How do you justify the notion that the straight guy is the default state, with everyone else being a variation on them? Without using the judeo-christian character of adam? Straight guys seem to expect a certain amount of privilege, awarded to no one else.

That’s a tough question, professor – give me a moment to go consult my father figure…

Just kidding! Straight guys never talk to their dads about anything more important than favorite marinade recipes and which club to select for a 300-yard par 4.

The truth is: I’ve never had to justify that notion because it is my default state. I was born. At some point, I discovered that girls have different genitalia and some years later I realized I had made it through high school and college without getting too excited about American Idol.

But since you asked, let’s put it in straight-guy terms: Asking why “straight guy” is the default state is like asking why Doritos only had one flavor for so long. (In this example the Toasted Corn and “Taco” flavors are simply an evolutionary link between traditional tortilla chips and the modern day Dorito.) Really, Nacho Cheesier was just all anybody had to go off of for awhile. It was oppressive and ignorant, especially to anyone who suddenly realized they just weren’t a person who enjoyed Nacho Cheesier Doritos.

Soon enough, the incredibly feminine Cooler Ranch came along to balance things out (also, the superlative “cooler” is clearly overcompensation for the years of denied variety. It’s like trying to balance out the patriarchy by becoming a radical feminist instead of like… the first woman senator or whatever.)

Fast forward to our current age of enlightenment where we are allowed a choice of so many fabulous and specific flavors like “Last Call Jalapeno Popper” and “All Nighter Cheeseburger”. And don’t even get me started on the implications of the Hot Wings/Blue Cheese or Zesty Taco/Chipotle Ranch Collisions flavors: Now that is some progressive thinking.

Frito-Lay’s insistence on constantly modifying the classic Nacho Cheesier flavor (and related packaging) is really just an admission that homo-hetero-ness is really more of a sliding scale than a simple definition.

Can Men and Women really be JUST friends?

Well, yes, technically. It all depends on how OK you are (you’re a woman, I’m assuming) with being friends with someone who wants to have sex with you. That and if there are people this man would like to have sex with other than you.

As long as there is someone else this guy would rather have sex with – someone other than you, you’ll probably be fine friends. (Again, we’re operating under the assumption that you don’t actually want to sex up this guy. That is your own problem, lady. And you should just give up trying to be friends.)

Don’t be your man-friend’s last resort, is what I’m saying. Distract your man-friend by setting him up with your easy ladyfriends or something. Pay for professionals if you have to. This is what modern Male-Female friendships have come to.