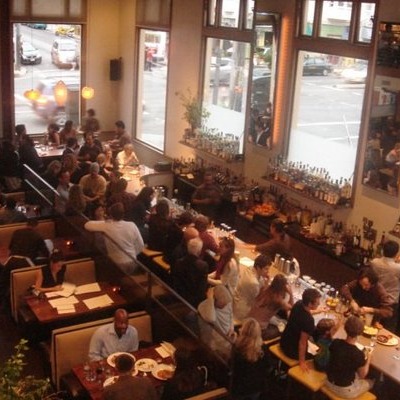 If there is one thing that basically equals love for San Franciscans that thing is Nopa the restaurant.

Nopa has a bunch of things going for it. First, it’s a restaurant, which, if you’re a San Franciscan, is just kill-yourself awesome.

Second, it’s sort of named after a neighborhood that only exists in people’s minds, which appeals to San Franciscans’ sense of being in love with neighborhoods generally and the one they think they live in specifically.

Third, the decor is California rustic, which basically means the napkins look like dish towels, the ceilings are soaring, the bar is stocked and there’s a communal table.

Finally, the people who work there act like you showing up is basically a joke that you’re playing on yourself, and this appeals to their sense of French Relativism, which is like irony only thinner.

You’ll walk in at 1am after loitering all night at some show at The Independent that you only went to because you were waiting for a table at Nopa, and you’ll say something like, “Two? For dinner?” and the restaurant’s beautiful* hostess will smirk and invite you to try to find a seat at the bar, which is an invitation to go fuck yourself, which is a euphemism for life.

So you will, try to find a seat at the bar that is. You won’t, but for the sake of argument let’s say that you do.

You sit down and promptly try to order some fried broccoli florets with zesty breadcrumb icing. To which the server will say “We might have that” like you just made it up off the top of your silly little dopey head, and hadn’t read it directly off the menu that he himself set in front of you not one minute before. Hell, you wish you had made it up. If you could come up with a dish like that, you’d own this town.

He’ll saunter away to see about some broccoli, and you’ll sit there hoping against hope that he’ll let you pay for something that’s on the menu. Then, he’ll saunter back, smile like the handsome man that he knows you think he is, and say, “We will be able to accommodate your request for broccoli.”

And you will say, “Great! Thank you so much! I really appreciate it!” With so many exclamation points someone might mistake you for a work email.

You’d like to complain, but this is of course the reason you come to Nopa. Just to see what might not happen, and maybe eat a guinea hen in the process, and maybe not.

*people who are hot in restaurants are not necessarily hot on the street or even in a café.