Boredom And Silence At Not So Silent Night 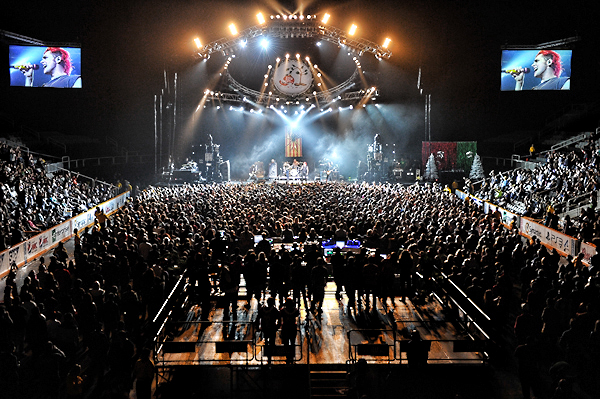 The thing about Not So Silent Night was, well, it was actually kind of silent.

Live 105’s annual holiday get together at the HP Pavilion in San Jose featured Broken Bells, The Black Keys, Phoenix, My Chemical Romance, and The Smashing Pumpkins. With a lineup like that you’d think it’d be an instant recipe for success, but it just wasn’t.
Maybe it was the early (6pm) starting time, or the rows of empty seats, or that the MCR fans had absolutely nothing in common with those that came to see the Smashing Pumpkins, making it hard to unite for the sake of a good time.

Whatever it was, energy was highly lacking for most of the five hour shindig. I think the concert’s most relevant relationship to the holidays is that it was about as thrilling as sitting around the dinner table on Christmas day while your Aunt Jude waxes on about joy of caring for feral cats. Entertaining and funny at times, but no one could really blame you for falling asleep.

Broken Bells played to a half-empty arena for their entire set. I say half-empty for a reason, they seemed just as bored as those sleepily glued to their seats. The music and vocals were on point, but their songs are a little too sleepy for an arena. Though when “The High Road” came on people seemed to be shaken from their naps.

The Black Keys can’t play a set without drowning in their own sweat, but that’s why I like them. They played the first half of their set with the help from keyboards and a bass (cheaters!), but finished up on their own. Despite pounding percussion, grinding guitars, raw rock and roll feel and obvious passion for the songs, the crowd never responded with mutual intensity. As singer Dan Auerbach put it, “This place is quieter than our practice space.” Ouch, the truth hurts.

I wouldn’t be surprised if anyone suffered a seizure during Phoenix. Their plentiful use of strobes certainly helped their stage presence, but it wasn’t what carried their set; they needed no help with that. Phoenix took command of the stage, driving us through calm grooves like “Fences” and filling us with dance and hope during “1901.” Judging by the amount of blissful faces, it was probably the highlight of the night.

If I were giving out awards, My Chemical Romance would win “Best Reason To Lie To Your Mother About Sleeping Over at Your Best Friends House.” I am by no means an MCR fan, and I didn’t think there were many there, until the lights dropped right before their set and it sounded like thousands of 13-year-old girls had heart attacks. They played with a respectable amount of energy, dropping their classics like “Helena”, “I’m Not Okay”, and opening with new hit “Na Na Na.”

It’s hard to know what to think about the Smashing Pumpkins these days. Their classics are sacred, their new music isn’t what we want to hear, and the group holds zero original members besides Billy Corgan, who believes he is the band (and he’s kind of right). They gave us what we wanted with “Today” and “Bullet With Butterfly Wings” but seemed lifeless. Next to Billy, the rest of the band seemed extremely quiet, possibly beaten into obedience by visionary Corgan.

There’s a few things that kill the mood at concerts: People watching the Jumbo-tron when there’s a stage right in front of them, people playing Monopoly on their iPhones during Phoenix, and people reading the newspaper during the Smashing Pumpkins. I saw all these, and they say one thing: boredom.