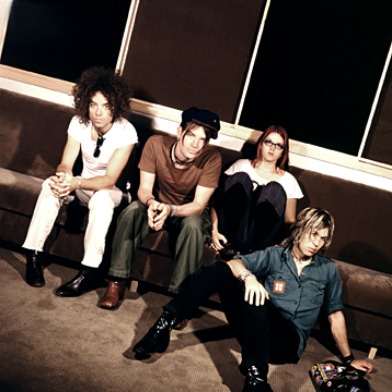 I’d be lying if I didn’t admit that I have a huge girl crush on keyboardist and backing vocals Zia McCabe from The Dandy Warhols. A founding member of the well-known Portland rock band, Zia and her fellow band members’ brand of mod-rock psychedelia has seen much commercial success and mainstream approval since forming in 1993. Maybe you’d recognize the theme song from Veronica Mars, “We Used To Be Friends?” So when the Dandys came back to San Francisco at the end of a national tour, theRegency Ballroom was packed with people who seemed to know every lyric.

For better or worse, many of the Dandy songs sound ready for Volkswagen commercial success and walk a fine line between inventive indie rock and easily digestible radio hits. Contextually, The Dandy Warhols were one of the originals bringing a unique take on Brit-pop to the forefront of the American mainstream music scene back in the early 90’s. Whether the younger tweens in the audience are aware of the band’s influential history or of their more recent hits, the Dandys delivered a high paced show that was definitely entertaining to watch.

On Saturday, the band’s two hour set started with quick back-to-back songs spanning a long recording career including selections from such albums as The Dandys Rule OK?, The Dandy Warhols Are Sound, and Welcome to the Monkeyhouse. The Dandys complimented compact songs with humorous short interludes into old Westerns, like the harmonica wielding cowboy song “The New Country.” Despite at times getting lost in ethereal vamps, the Dandies seemed to eventually steer their way back on course with the next upbeat song intro.

The Dandys also gave a shout out to their frienemies the Brian Jonestown Massacre, who were unfortunately not able to be at the show. And for those who have seen the award winning documentary Dig! (if not, run to the nearest video store or NetFlix it today), I think we can agree that it would have been an unexpectedly edgy addition to the otherwise polished set.

One of the best songs of the night, I Love You, started with the increasingly threatening refrain “I love you” repeated until it morphed into a threat that took on possible overtones of obsession, addiction, or perhaps a response to fame… The ambiguity works, and that’s where we see glimpses of what makes the Dandy Warhols a band that has held onto musical success for over a decade. It’s in the enigmatic dark interludes nestled in dreamy backgrounds that we sometimes catch a flash of something deeper and more raw. Between the balance of sweet pop harmonies and gritty sound walls, one can see what made Capitol records pick-up the Warhols’ first independent album (Dandy’s Rule OK?) and destined the band for fame.

Despite the Regency’s sweltering mugginess and insultingly overpriced shitty beer (coincidence? I think not), the Dandies excelled at what they do best- using their stage presence and charisma to deliver a tight and infectious set. And Zia, if you read this, call me sometime! If you want to go record shopping or brush each others hair. I’m down.