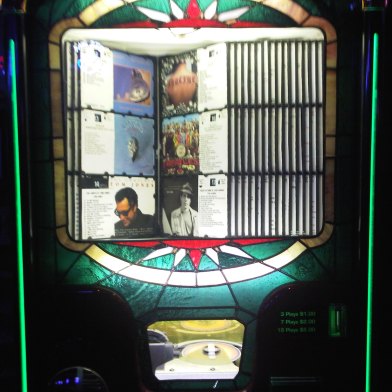 Today marks the 121st anniversary of the jukebox, the first one of which was fired up at the SF’s Palais Royale Saloon on this day in 1889.

I once attempted to review jukeboxes around San Francisco. Real jukeboxes, not the internet kind.

Internet jukeboxes are really taking over (even Shotwells). But does anyone really care nowadays? Jukeboxes serve two purposes: drunken singing of tunes you would not be caught with on your iPod because they are played on the radio stations, or an excuse to have some quiet time and get away from the crowd you’re drinking with. I usually use them for the latter, as I take forever to choose my jukebox playlist. I’m also pretty good at choosing the former for making said company more exciting.

But nowadays, I’ve moved on from a boring crowd of late-20somethings who try to act like younger 20-somethings still all excited and ramped up to be living sorta off their parents but in a big city, and only make sarcastic remarks about each other or their music, or their bikes, or their preferred places for food (hipster sandwiches).

Now I choose carefully who I drink with, and it’s usually people I don’t find boring so I only need to escape to the jukebox if I get somewhere early or if someone asks me to jukebox. And somewhere along the line I gave up the hopeless struggle against internet jukeboxes. I’m a grown up now. I own Pottery Barn armoires.

I guess I’m still working to let go of the past, especially when that nostalgia is what internet jukeboxes are crassly banking on. “OH! Remember that time we puked our Pepsi Zero and Zima during the Smashing Pumpkin’s concert? I wanna hear that song!” And you can, instantly.

If we’re going to have a moment of nostalgia, I want us to work for it. Yes, I will entertain you on Halloween at Doc’s Clock with some Misfits, Ramones and Sonics, while dressed as Kurt Russell in Big Trouble in Little China. But you had better not ask me to jukebox on anything Louis Glass wouldn’t approve of, because, armoire or not, I’ve still got a little fight left in me.